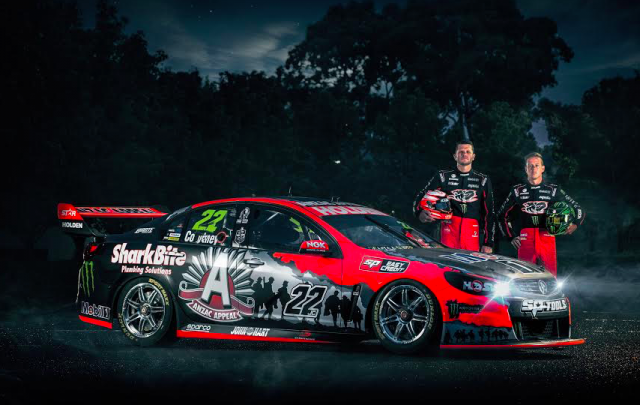 The Holden Racing Team will again show its support for the ANZAC Appeal at this weekend’s WD-40 Phillip Island Super Sprint.

The team has released its latest tribute livery, continuing a joint campaign with the Returned & Services League that started in 2013.

A silhouette of diggers from the original Gallipoli landing features down both sides of the cars alongside the ANZAC Rising Sun, while signage also occupies the rear wing and roof.

Both cars will run the revised livery at Phillip Island ahead of ANZAC Day on April 25.

“Holden and the Holden Racing team are proud to continue their associations with the Returned & Services League and its ANZAC Appeal,” said Holden’s motorsport and sponsorship manager Simon McNamara.

“We consider it an honour to carry the ANZAC Rising Sun on our factory race cars and we are delighted to help raise awareness to the appeal and assist in raising vital funds to help veterans and their families when in need.”

Those wishing to support the RSL are encouraged to buy an ANZAC Appeal badge or donate directly online.

“While the livery stirs up the emotions, it is important to remember our main aim is trying to raise awareness to the ANZAC Appeal and the great work the RSL does in supporting veterans and their families.”

Garth Tander and Courtney head to Phillip Island fifth and sixth in the championship respectively after a tough run last time out at Symmons Plains.

The HRT has the most race wins of any team at the Victorian venue, scoring 17 victories in the 54 races held at the venue since it first hosted a round of the championship in 1976.