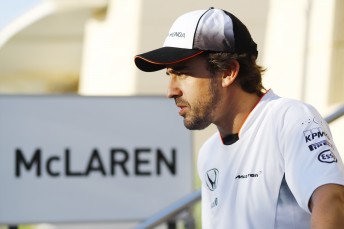 Fernando Alonso is not taking his participation in this weekend’s Chinese Grand Prix for granted as he awaits an all-clear from the FIA medical team.

The McLaren driver was deemed unfit to contest the Bahrain Grand Prix by the FIA after sustaining a broken a rib and a lung injury following his spectacular crash at the Australian Grand Prix.

Alonso remains hopeful that he will return to the cockpit this weekend although his fate is yet-to-be determined as he awaits an FIA medical examination on Thursday.

“It was disappointing to be told I couldn’t race in Bahrain, but I fully respected the decision of the FIA medical team,” said Alonso in a team preview.

“While I hope I’ll be back in the cockpit on Friday, until I get the all-clear from the doctors to race – whenever that may be – we cannot assume anything, but I’m continuing to prepare for the race weekend as normal.”

McLaren reserve driver Stoffel Vandoorne deputised for the double world champion at Sakhir and will again be on standby in Shanghai if Alonso is unable to race.

Vandoorne impressed throughout on his F1 debut as he opened the Woking team’s account for the season with a 10th place finish.

“Once again, Stoffel will be on standby until Fernando has his routine meeting with FIA doctors on Thursday, and until then we will be readying ourselves as normal,” said McLaren racing director Eric Boullier.

“Fernando has been recuperating at home and training as usual, and we, like him, hope to see him back in the car. We’ll accept the outcome – whatever that may be – and plan accordingly.”