V8 Supercars champion Mark Winterbottom has underlined his ongoing desire to earn a start in NASCAR after returning from his latest trip to the United States.

Winterbottom made a flying visit to the US between his recent Symmons Plains and upcoming Phillip Island V8 Supercars commitments as part of a tour with sponsor The Bottle-O.

The trip was to include a day with the Richard Petty Driving Experience at Chicagoland Speedway in which Winterbottom and the guests would sample the program’s NASCAR ‘experience cars’.

The 34-year-old is open about his desire to compete in at least one of the second-tier NASCAR Xfinity Series’ road course races in future.

He has made one-off starts in the Brazilian V8 Stock Car Series’ showpiece co-driver event in recent years but missed out this season due to a date clash with V8 Supercars.

“It wasn’t a test but it would have been cool to drive one of the cars just to see what they’re like,” Winterbottom told Speedcafe.com of the cancelled Chicagoland laps.

“I’d like to do an Xfinity Series race just to go and race different people, like in Brazil, to just see where you stand.

“NASCAR is a pretty easy transition for us if it’s a circuit race, so you’d want to do something that you’re competitive at. 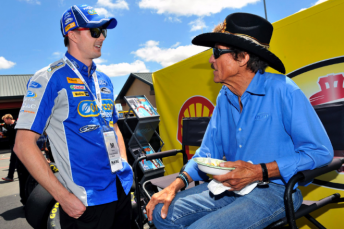 Winterbottom with Richard Petty at the 2012 Sonoma NASCAR race

“Proof shows that Marcos (Ambrose) and Owen Kelly and pretty well every Australian who’s gone over has done well, but it’s hard to get in because it’s only two or three rounds.

“They all want money as well and that’s not what we want to do.

“But if an opportunity came up we’d definitely have a go.

“NASCAR is a cool sport and I’ve been following it a few years.”

While keen on NASCAR and the Brazilian Stock Cars, Winterbottom says he has no desire to chase drives in Europe’s booming GT scene, which largely consists of pro-am endurance racing.

Winterbottom was approached by Prodrive co-owner Rusty French about a possible GT3 start in this year’s Bathurst 12 Hour, but elected instead to spend the time holidaying with his family.

“I like categories where the top 10 is covered by a tenth of a second,” he said.

“That’s why I love the racing in Brazil, because it’s like our racing, and NASCAR is the other one that I’d love to do.

‘The good thing about Brazil is that they hand-select drivers from around the world, where with NASCAR they want money.

“GT stuff I’m sure is cool but it’s not really on my radar.”

After achieving his career goals of winning Bathurst and the V8 Supercars Championship in recent seasons, Winterbottom isn’t planning on exiting the category any time soon. 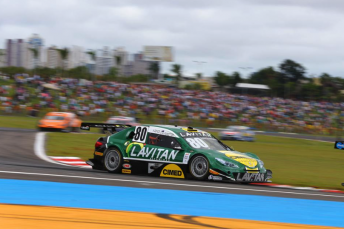 Winterbottom moved into V8 Supercars via the Dunlop Series in 2003, before stepping up to the main game the following year.

“Getting results and winning races is the motivator, so if I can do that for the next 10 years I’ll keep at it,” he said.

“You’re always tempted by other things, but even the NASCARs, the technology in them is still very basic compared to ours.

“You always look for other things, but I think what we’ve got is just as good if not better.

“I don’t know how long I’ll race for, but there’s at least three more years here (at Prodrive) and we’ll look at it after that.”