Miller to remain in America for injury rehab

Miller to remain in America for injury rehab 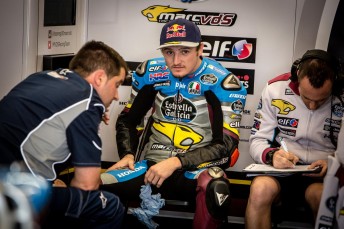 Jack Miller has delayed his return to Europe after sustaining a foot injury which forced him to withdraw from the Grand Prix of the Americas.

The Australian rider fractured the fifth metatarsal in his right foot after a crash in opening practice for last weekend’s third round of the world championship.

Miller underwent physiotherapy and was given a pain killing injection at the Circuit of the Americas before the Marc VDS Honda squad withdrew his entry.

The 21-year-old from Townsville was due to fly back to Europe this week but the effects of the injury will see him remain in America to work with medical professionals.

“The plan was to head back to Europe after two weeks away straight after the race on Monday, but because of the accident and how badly my foot has swelled up, I’m staying in America this week and going across to Los Angeles,” said Miller.

“I’m going to work with a physio and doctors there and not attempt to fly back to Europe until the swelling has gone down, more swelling at the moment isn’t something I want to risk with a long flight.

“I’ll be in LA for the next week most probably, and then head back to Europe and probably go straight to Jerez.”

The injury setback is Miller’s second of the year after suffering a broken leg in a motocross crash in January.

After being forced to miss a pre-season test on top of last Sunday’s Austin Moto GP absence, the young Aussie says his focus is on returning to full fitness after a difficult start to the year.

“Being injured again – my first thought was frustration more than pain or even anger to be honest,” added Miller.

“The bad luck with injuries just seems to keep dragging on and on.

“It sounds like such a small thing, but I can’t wait to actually feel healthy again and not feeling like I’m riding around an injury or in rehab.

“That has to be the focus now because we’re three races in and I don’t want this to drag on and on.

“It’s disappointing to just get a couple of points out of these first three races because I know we can do a lot better.

“The main thing is to get my body right, stay as positive as I can and then get back to Europe and hit the reset button on the season and start again.”

The MotoGP season kicks off its European campaign with the Spanish Grand Prix at Jerez from April 22-24.