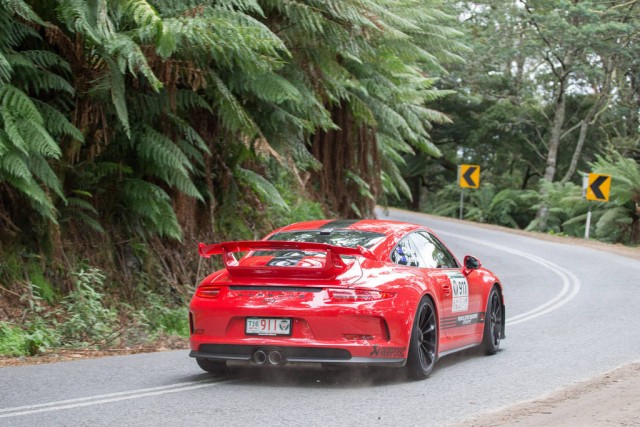 The view the field at Targa Tasmania has of Matt Close. PIC: Angryman Photography

Matt Close leads the GT2 class in the 25th running of Targa Tasmania after seeing off the challenge of reigning champion Jason White, on day two of the six day event.

Driving a Porsche GT3, Close finished the day two seconds in front after a battle that saw the lead change several times throughout the day’s seven stages.

Day 2 of Targa Tasmania saw competitors head east of Launceston for seven closed road tests totalling 69.7km, the longest of which was the opening ‘Sideling’ stage, at 13.71km.

Multiple winner Jason White, in a brand new Dodge Viper, held an eight second GT2 advantage before the final stage of the day, but Close flew through the twisty Rossarden stage to snatch back the lead.

White had started the day five seconds clear after a 60 second penalty applied on Day 1 was removed.

“I’m really glad Jason (White) had his penalty taken away. That’s not how you want to duke it out,” said Close.

“We’re trying to look after our tyres early because it looks like it’s going to be a fairly dry event.

“I don’t want to ruin my front tyres by getting drawn in to trying to win it on day one.”

Despite brake problems, Craig Dean has consolidated third place in his Ford Mustang, but has a group of cars snapping at his heels, including Michael Pritchard in another Dodge Viper.

The GT4 competition, for showroom 4WD cars, sees Ben Manion holding a surprise lead in his Subaru WRX STi, ahead of the pre-event favourite, Tony Quinn, who suffered traction control issues with his Lamborghini Huracan.

A pair of Subaru WRXs in the hands of Brent Coleman and Ralph Norton are third and fourth, with Adam Spence’s Nissan GT-R rounding out the top five.

In the Classic handicap event, Peter Ullrich, in his beautiful 1963 Jensen CV8 leads Victorian Andrew White’s 1961 Volvo 122S by 49 seconds, with Leigh Achterberg a further six seconds back in his Porsche 944.

“It’s been a good day today. We’ve had a few weird rattles and things, but the wheels haven’t fallen off, so it’s all good,” Ullrich explained.

“We’ve been going pretty hard – we push the old girl as fast as she’ll go, comfortably without falling to bits, so no dramas so far.”

Peter Nunn led the Classic GT competition after five stages, but crashed his 1985 Porsche 944 Turbo and is out of the event.

That has put Matthew Cardinaels into the lead with a 48 second advantage over another Datsun 240Z, driven by Jon Siddins. Last year’s winner, Craig Haysman, is third in his 1981 Triumph TR7 V8.

Wayne Clark’s 1938 Dodge Speedster Special is the only vintage car remaining in the event after the early demise of Graham Copeland’s 1936 Desoto Special.

On day three of Targa Tasmania, crews head west for eight stages over a challenging 137km of competitive driving. Two of the day’s stages, Cethana and Riana, are over 35km in length, which is sure to be a real test.