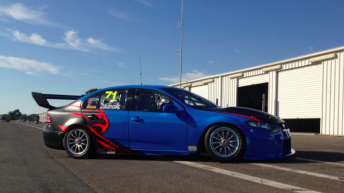 Zukanovic competed in the category between 2007 and 2014 before stepping away to focus on an increasing role in his family’s Action Motor Industries business.

The now 35-year-old retained the ex-Ford Performance Racing Falcon FG that he previously campaigned and is today performing a systems check with the car at Winton ahead of the weekend.

Zukanovic’s own crew will field the car with help from MW Motorsport, which also runs previous generation ex-FPR equipment.

“I’ve had the car for sale and it hasn’t moved, so it seemed a waste for it just to sit there,” Zukanovic told Speedcafe.com. 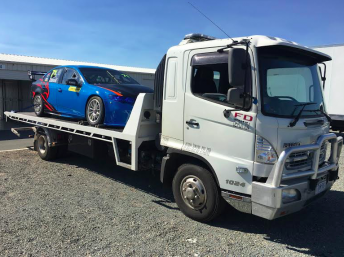 “I’ve pencilled in the two local events, Phillip Island and Sandown, because logistically it’s quite easy to do.

“I’ve done it for the longest part of my life and to be back is really exciting.

“I’m pumped to be back in the car again.”

Although out of a V8 Supercar since December, 2014, Zukanovic raced at Phillip Island as recently as last November’s V8 meeting, where he fielded his Ford Mustang in the Sports GT support races.

“Up against the Car of the Future cars with a fair bit better aero, I’m hoping to get into the back of the top 10 if I can,” said Zukanovic of his expectations for the weekend.

“I’ve been out of the seat for a while and you need to be in these cars constantly to be super competitive.

‘My plan is just to go out and have a bit of fun and see where we are at the end of it.”

The Dunlop Series has attracted 25 entries for Phillip Island, two less than that seen at the Adelaide season opener. 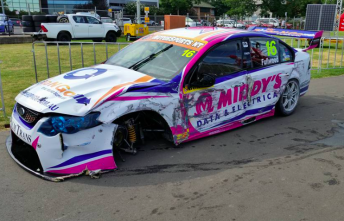 Fullwood has switched chassis after his hit at Clipsal

MWM is fielding just two of its own cars after running Jesse Dixon as a one-off at the Clipsal 500.

Bryce Fullwood will tackle the Island in the chassis campaigned by Dixon in Adelaide while his own is being repaired from its Turn 8 accident.

The Adelaide-based Adam Wallis and THR Motorsport Holdens are both absent, with Taz Douglas having switched out of the latter squad and into Eggleston Motorsport’s third entry.

Terry Wyhoon’s Image Racing has meanwhile entered both of its cars but remains without a confirmed driver for its second Ford.

Steve Owen drove the car in Adelaide and currently sits fifth in points but will not continue due to a budget shortfall.