CAFE CHAT: SVG on adjusting to life at T8

CAFE CHAT: SVG on adjusting to life at T8 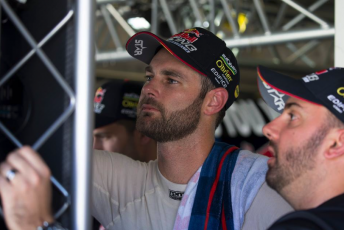 A late mishap at Symmons Plains aside, Shane van Gisbergen has quickly established himself as the driver to beat in this year’s V8 Supercars Championship.

Moving from Triple Eight customer team Tekno Autosports into the main Red Bull outfit this year, the 26-year-old has been in impressive form.

Three wins at the non-championship Albert Park meeting were followed up with another victory at Symmons Plains, where misjudging an oil slick with five laps remaining denied the Kiwi a double.

Speedcafe.com’s Stefan Bartholomaeus spoke to van Gisbergen about the transition between teams and what it will take to win this year’s title.

SPEEDCAFE: Shane, obviously there was a lot of focus on the way Symmons Plains ended, but the overall picture is that you have found success very quickly with Red Bull. Has the process of settling into this team been smoother than you expected?

SHANE VAN GISBERGEN: Yes and no. I didn’t think I’d just come straight in and smoke everyone, but in saying that we’ve worked pretty hard and I spent a lot of time in the shop over summer to make the process as easy as possible.

It’s quite different and the first few races were a struggle, especially in qualifying. You could look at the sectors and think ‘I should be at the front’. The time was there, I just wasn’t getting the most out of the car while I was learning its limits.

Racing wasn’t an issue, it’s just that maximising the car in qualifying has been tough because it’s so different. But we’re getting better every time we get in.

SPEEDCAFE: Are you pretty close to where Jamie (Whincup) and Craig (Lowndes) are on set-up, or have you had to work outside of their playbook to be comfortable?

We drift apart a bit, but they’re all the same spec so they go fast the same way. We’re not different by much at all. SVG battling it out with Whincup and Lowndes at Albert Park

SPEEDCAFE: Has it been good to have team-mates again? Do you feel you’ve learnt directly from those guys?

VAN GISBERGEN: Yes, definitely. Last year although we got data (from Triple Eight) we’d look at a corner and my car just couldn’t do that with the way the cars turn and drive.

Now I can reference it and know what I need to do to improve or that we need to make the car better.

Having two guys in the same equipment that are on the limit as well is just awesome to compare against and learn from.

It’s a big change and it’s pretty tough because there’s nowhere to hide, but it’s good.

SPEEDCAFE: So there’s been a bit of ‘oh, that’s what it’s meant to feel like’ now that you’re in a Red Bull car with all of the latest Triple Eight bits?

VAN GISBERGEN: Definitely. But it’s not like the parts weren’t available to Tekno, they could have had them.

There were a few things last year we chose that we thought were better and others that we didn’t want to pay the money to buy.

We were running a pretty old spec car at Tekno, but we still won the last race (of last season). It was still a very fast car but at some types of tracks we weren’t good enough.

I can see why now that some parts work and some didn’t. Even running some Tekno style of set-ups have worked well on the Red Bull car. I’m learning a lot.

SPEEDCAFE: It’s no secret that what cost you any chance of being a title contender at Tekno were those events where you did have massive performance dips. Are you confident now that you are at Red Bull that won’t be the case? That it was an equipment issue, not a Shane issue?

VAN GISBERGEN: Yeah. The one that everyone keeps talking about is Perth because the last three years I’ve been s*** there.

But at Stone Brothers there I was on the podium once or twice and always one of the fastest cars.

I don’t feel like there’s any tracks or style of corners where I struggle at with my driving, but we’ll just have to see when we get there.

I’ve never done that well at Winton, but have always been quick there.

We’ll see. I think the car is definitely good enough to do it, but we’ll just have to do it all together. Van Gisbergen took another win in Race 4 at Symmons Plains

SPEEDCAFE: On Sunday night at Symmons you didn’t speak to the media, but your brief press quote emphasised that it was ‘150 points down the toilet’. Are you thinking championship that much already, that when something like that happens the points loss is at the front of mind?

VAN GISBERGEN: I didn’t say much. There was not much positive to say so there was no point in saying it. I just stuffed up.

When you’re five laps away from getting 150 points it pisses you off, especially when it’s a mistake.

It hurts, but I’ve made that error and I’ve got to try and make it up.

SPEEDCAFE: There was a fair bit of criticism from past champions Mark Skaife and Russell Ingall about the way you judged that situation, including comments that you can’t win the championship making mistakes like that. Do you feel that’s fair?

VAN GISBERGEN: Ingall once said it’s quite easy to sit up in your ivory tower and judge people, didn’t he?

I’m not sure really. I know that you can’t afford to make mistakes like that, but if it was at the end of the season it would hurt more because you’ve got to make it up.

At the moment we’ve got plenty of time to adjust our tactics, if you want to call it that. We’re only 70 points off the lead.

SPEEDCAFE: Do you feel that Jamie and potentially Craig will be your main contenders for this title?

VAN GISBERGEN: I’m not sure. The HRT were really quick in Adelaide and nowhere at Symmons, which is pretty similar to Penske.

It’s hard to say, but every race we’ve gone to the Triple Eight cars have been up there and Jamie and Craig have been there as well.

They’re the guys we’ve been racing against and so far it’s been really good. We’ve raced hard and clean together, it’s been enjoyable, but we’ll see what it’s like later in the year. SPEEDCAFE: Next up is Phillip Island, which is a big technical track that potentially exposes the differences between a Red Bull and a Tekno car. Is that another key moment in you feeling what it’s like on the other side of the fence this year?

VAN GISBERGEN: I think so, yes. When I raced there the first couple of years with Tekno we were really quick and then last year I felt like the car was awesome but we were only sixth or seventh.

We got everything we could out of the car but we still weren’t fast enough. It’ll be interesting this year to see if all of the latest developments have progressed or not and how far up we can fight.

But I do think it is those types of tracks where I’ll most see the differences between the two cars.