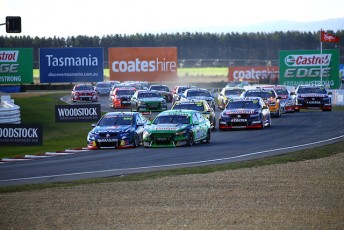 V8 Supercars has staunchly rejected any truth that the business will be refinanced amid ongoing speculation over potential sale moves.

The Australian newspaper reported today that UBS is set to exit its position as a lender to V8 Supercars.

According to the paper, UBS and the National Australia Bank collectively have $26 million in loans to the company which are due to be refinanced “in the coming weeks”.

However a source has told Speedcafe.com, that the debt that UBS and NAB carry is in a separate Archer ‘vehicle’ which owns the shares in V8SCA and that it is not in V8SCA itself, therefore that debt has zero bearing on V8SCA.

The apparent refinancing has further fuelled speculation that majority stakeholder Archer Capital is manoeuvring to sell the business.

The category was last week forced to deny reports that Archer had targetted Seven West Media as a potential buyer.

“All of it is absolute rubbish,” a V8 Supercars spokesman said when asked of the refinancing and sale reports.

Archer purchased a 65 percent stake in V8 Supercars five years ago in a move that valued the business at $300 million.

The deal spelt an end to the ownership of the founding company, Sport and Entertainment Limited (SEL) and reduced the teams’ collective stake to 35 percent.

Next Story CAFE CHAT: SVG on adjusting to life at T8