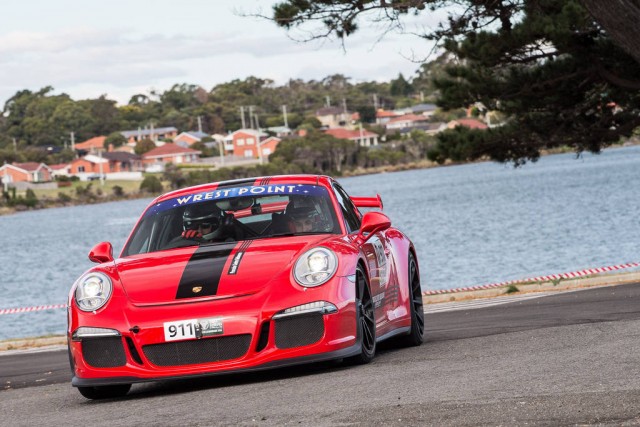 Matt Close has taken the lead in the GT2 class of the 25th running of Targa Tasmania after Jason White was handed a 60-second penalty on the opening stage.

Five-time champion, White, is 57 seconds off the lead in the six-day enduro after exceeding the minimum time on the Legana test; designed as a warm up for cars and crews. While only 0.8 seconds under the allowed time, it was enough to attract the hefty penalty, leaving the Tasmanian plenty to do over the final five days.

White showed his potential in his new Dodge Viper ACR Extreme on the final stage at George Town, completing the 4.81 kilometre section three seconds quicker than Victorian, Matt Close in his Porsche GT3.

Close sits three seconds clear of Michael Pritchard in another Dodge with Toby Gill third a further ten seconds back in his 2016 HSV GTS.

“I know it sounds like a terrible cliché, but we’re really focussed on what we are doing and letting the results take care of themselves,” said Close.

“Since we won Targa High Country (in November), we made a few wheel alignment and other adjustments to manage our tyre wear a bit better, but there’s not much else you can do with the new rules.”

Tony Quinn is expected to do very well in the GT4 category for 4WD Showroom cars, but had to settle for 8th place today having experienced some early troubles with his Lamborghini
Huracan.

“We’re having an issue with the traction control kicking in – we’re not allowed to play with it, so it is what it is,” Quinn said.

“The suspension is not as good as I’d like it – I’m not whinging, but just saying it could be better. We weren’t pushing hard at all today – it might be a different story by day three or four.”

In the other competitions, Simon Cilento leads Modern in a 2005 Porsche 911 Turbo S, Alan Roe leads Early Modern in his 2000 Mitsubishi Evolution 6.5 RS, and Jeff Beable holds a slender buffer in Sports GT.

After a relatively easy opening day, the real challenge will come tomorrow, with 68.88 competitive kilometres across seven competitive stages.