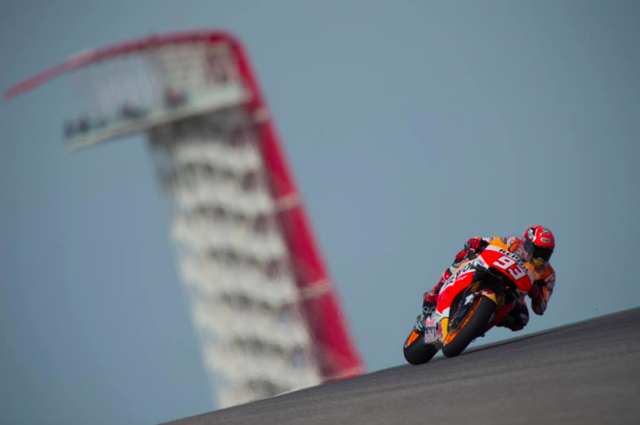 Marc Marquez remains unbeaten at the Circuit of the Americas after a clinical victory in an Austin MotoGP that saw an early crash for Valentino Rossi.

Marquez claimed a fourth win from as many races at the Texas venue while Jorge Lorenzo ran a distant second and Andrea Iannone was a similarly lonely third in the 21 lap encounter.

Lorenzo jumped best from the middle of the front row but the Movistar Yamaha rider skated into the first corner and eventually emerged in second position, behind Marquez.

He then dived under Marquez at the bottom of the hill on the opening lap but ran wide and entered the back straight in third position, trailing Andrea Dovizioso, while Rossi too exited off the corner badly and dropped to sixth.

Worse was to come for Rossi on Lap 3 when the Italian lost the front at Turn 2 and ended up tumbling through the gravel trap.

Lorenzo passed Dovizioso down the hill on Lap 5, but the leading Repsol Honda was already over two seconds clear by the end of that lap.

Dani Pedrosa had also lined up behind the Italian but dropped his Honda on Lap 7 and nailed the Ducati at Turn 1, the second time in as many races that Dovizioso has been taken out.

Maverick Viñales eventually passed his Suzuki Ecstar team-mate Aleix Espargaro at his third attempt on Lap 11, after which the race essentially became a procession as Marquez rode away to a lead which peaked at over eight seconds on the penultimate lap.

The 2013 and 2014 World Champion already has a strong hold on the 2016 title with the last two wins and a podium in Qatar, while his factory Yamaha rivals have a crash each to their names.

“I’m really happy,” said Marquez. “I think I did a really good race and I feel really great on this circuit.

“The race was not very fun but we get 25 points that was the most important thing.”

Viñales’ fourth represents his personal best result to date, while fellow Suzuki rider Aleix Espargaro realised his best finish since a second placing in a rain-affected Aragon race in 2014.

Cal Crutchlow is yet to score a single championship point this season despite finishing for the first time as he crossed the line 16th after a mid-race fall.

The Brit had at least escaped a near-leg sweep when Bradley Smith went down in sympathy with his compatriot at Turn 11.

Jack Miller did not start after sustaining a foot fracture in a practice crash.

The MotoGP World Championship now moves onto the European phase of the season as Jerez hosts the Spanish MotoGP from April 22 to 24.