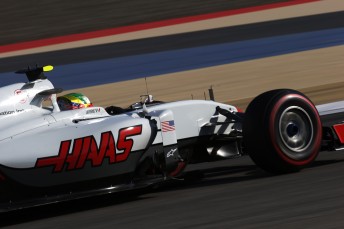 Haas F1 has updates planned for its VF-16 car

Haas F1 team principal Gunther Steiner says his team cannot afford to stand still in the development race despite an incredible start to its maiden season in Formula 1.

The fledgling North American operation has burst onto the F1 scene this year scoring points finishes in its first two races.

Aided to sixth by a red flag period in Australia, Haas confirmed its genuine pace with Romain Grosjean producing an inspiring drive from ninth to fifth in Bahrain.

While the squad is still learning its Ferrari powered VF-16 challenger, Steiner says updates are already planned to extract more from the car.

“We have developments coming, I don’t know how we commit to them (yet) because our strategy is to first see what we can get out of this car,” said Steiner.

“We still don’t know this car. I think there is more potential which we haven’t discovered.

“Once we have a stable platform, we will add developments. Maybe we have them for the next race. But we are not standing still.

“Will we have developments every race? No obviously not. But we will not stand still and not do anything because then you fall back.

“We will not be developing as much as the big teams but we will be in the ballpark with all the other teams in the midfield.”

The F1 season continues this weekend with a visit to Shanghai for the Chinese Grand Prix.