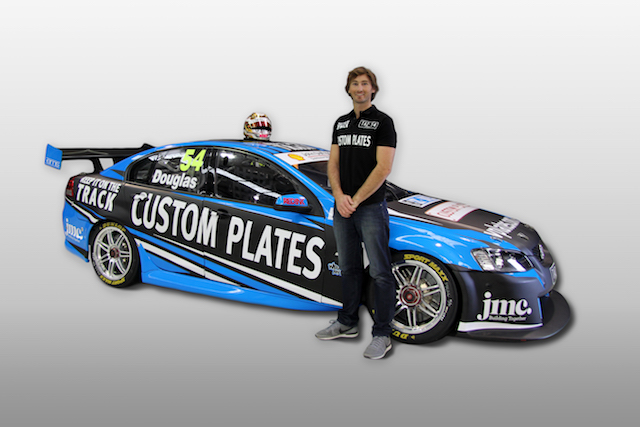 Taz Douglas with the #54 EMS Holden

Taz Douglas will pilot Eggleston Motorsport’s third ex-Triple Eight Holden in the second round of the Dunlop Series at Phillip Island this weekend.

The 32-year-old raced an ex-Kelly Racing Holden for THR Motorsports at the season opening Clipsal 500 and steps up to the EMS drive thanks to backing from Custom Plates.

Eggleston’s third car sat idle in Adelaide while the team fielded Paul Dumbrell and Liam McAdam in its other two entries.

Douglas’ deal is currently a one-off, with work ongoing to find the budget for the third round in Perth.

Sitting seventh in points after a 10th and a seventh in Adelaide, Douglas hopes to propel himself into the top five in the newer EMS equipment.

“It’s been a long time coming to have the opportunity to drive with a genuine front running team,” he said.

“I have worked extremely hard to get this deal over the line and can’t wait to get out on track.

“Everyone has high hopes going into the weekend, however I have to be realistic about my expectations.

“I will see how we are going after practice to assess mine, but if I can run somewhere around P5, I will be happy.”

Team manager Rachael Eggleston is confident that her cars can be competitive at Phillip Island, despite the presence of the latest generation Car of the Future chassis in the field.

“We are exceptionally excited that Taz has joined the team for Phillip Island,” she said.

“We have always been very keen to see what Taz can do in one of our cars, so it is fantastic that he has worked hard in getting some great partners on board and making this a reality for us all.

“We showed during the Clipsal race weekend that our pace in the project blueprint cars is still very strong by winning Race 1 and having the fastest lap in both races.

“We’re confident that our Triple Eight built Holdens will like the fast flowing nature of the Phillip Island circuit.”

Douglas, who finished second at Bathurst in 2014 with Nissan Motorsport, is yet to lock in a co-drive for this year’s Pirtek Enduro Cup.