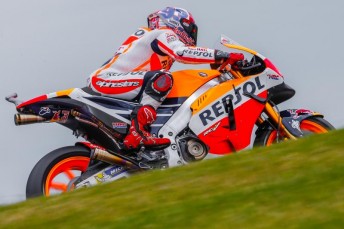 Marc Marquez has continued his pole streak at the Circuit of the Americas despite the best efforts of Jorge Lorenzo.

Lorenzo threw down the challenge to his Spanish compatriot with a 2:03.613s on his first timed lap, slashing seven tenths off his weekend personal best and undercutting Marquez’s practice benchmark.

Marquez, who has won each of the three Austin MotoGPs held to date from pole, ensured that Lorenzo would stay top for barely two minutes when he set a 2:03.188s the next time around.

Lorenzo was wasting no time in starting his second run just as the clock ticked past the halfway mark of the 15-minute Q2 session, and while he bettered his first effort by another few tenths it was not enough to dislodge the Repsol Honda rider.

Valentino Rossi finished the session in third, nearly four tenths off the pace of his Movistar Yamaha team-mate to move ahead of Ducati’s Andrea Iannone in the final minute.

Iannone, however, will start the race from seventh due to a three-position grid penalty levied after taking out team-mate Andrea Dovizioso in Argentina.

Jack Miller is a scratching from the third race of the season after yet another crash.

The Australian, who crashed four times during the Argentina meeting a week prior, fractured the fifth metatarsal on his right foot in a high-side during Friday’s FP1.

Despite participating in each of the following practice sessions, the pain became too much and the Marc VDS entry was withdrawn prior to Q1.