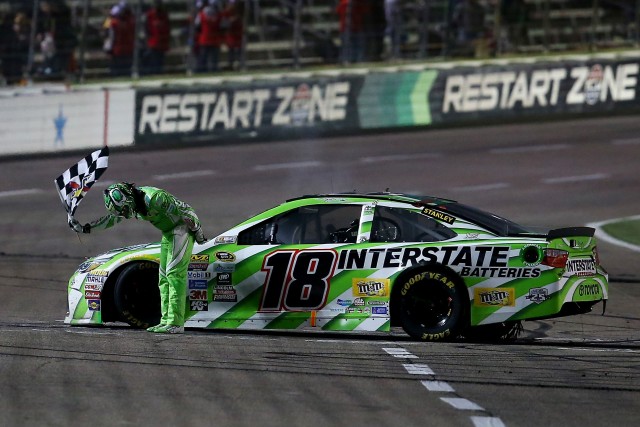 Kyle Busch takes a bow after another outstanding performance

Kyle Busch has continued his awesome run since the Easter break in NASCAR winning at Texas Motor Speedway, making it four-straight victories across the sport’s three national series’.

He has finished in the top-5 in six of the season’s seven races and it was also his ninth sweep of weekend races in his career. Since breaking his leg at the start of the 2015 season, Kyle Busch has a winning percentage of 22% or victory in just under one of each of the five Sprint Cup races he has contested.

His late-race surge at the Duck Commander 500 saw him back-up his win in the Xfinity Series the night before at Texas, and his sweep of both the Sprint Cup and Camping World Truck Series last weekend at Martinsville. All in the space of eight days.

Busch led 34 of 334 laps, including grabbing the lead off the final re-start from Martin Truex Jr., to complete a dominant evening for Toyota and the Joe Gibbs Racing organisation. It was his second win at the 1.5-mile track and the 36th of his Sprint Cup career.

“Everybody back at the shop has been building great race cars, they’ve been doing a great job for us. The crew chiefs here have been really working together, gelling together and putting everything together. It’s just fun, right now it’s all clicking and going together.”

The hard luck story was Truex Jr., who dominated the majority of the race to lead 141 laps. However, being the man out front was not the place to be in the closing stages of the race.

A full course yellow with less than 50 laps to run had the field all waiting to see what he would do. After he stayed out, all the other leading drivers pitted and put on fresh tyres.

Then a major 13-car mishap on the 293rd lap brought out another caution. Upon the re-start he was unable to hold off his rivals and he faded to a sixth-place finish.

The race was a story of tyres after rain delayed the start and cleaned-off the track surface. Usually drivers will run to fuel, but the pit stop window was around 80% of the distance due to the performance drop-off in the tyres.

The best cars seemed to be Truex Jr. and pole sitter Carl Edwards.

Truex Jr. was the best on the longer runs, while Edwards’ crew were quicker in the pits. That was until a loose fitted wheel forced an unscheduled stop and Edwards dropped out of contention for the win.

Pit road seemed to end Johnson’s hopes when he was being serviced when a caution came out. His pit stall was before the start/finish line and he went down a lap. He did fight back thanks to the ‘Lucky Dog’.

He was also involved in the 13-car wreck, after Austin Dillon came across the front of Johnson and went into the outside wall before spinning in front of the field.

NASCAR heads next week to the ‘World’s Fastest Halfmile’ at the 150,000 seat Bristol Motor Speedway for the Food City 500.