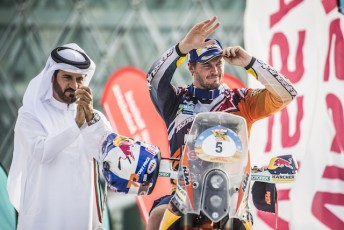 Dakar ace Toby Price has continued his sublime form by adding the Abu Dhabi Desert Challenge to his list of scalps.

Red Bull KTM factory rider Price came from behind with a surging final stage to win by more than two minutes from his team-mate Sam Sunderland.

Overnight leader Pablo Quintanilla had no answer to Price’s charge and finished third overall in the week-long marathon.

“I attacked really hard from the start and most of the time I rode with Sam, which was not my plan at the start,” Price, who became the first Australian to win the famed Dakar Rally in January, said.

“But when I caught him up, he stayed glued to my wheel.  I tried to shake him off but there was nothing doing. Anyway, I still managed to win the race and I’m really thrilled with this new success.”

The FIM Cross Country Rallies Championship moves to Qatar for the next event from April 17-22.