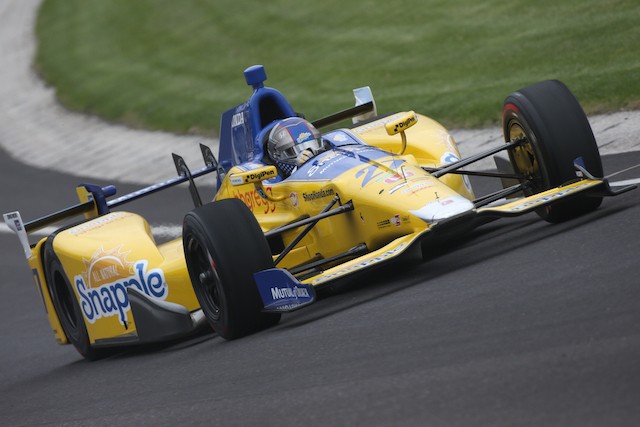 Marco Andretti posted the fastest speed in an official Verizon IndyCar Series test to evaluate configurations of the Chevrolet and Honda aero set-ups at the Indianapolis Motor Speedway.

A total of 15 drivers took part in the tests where all cars were fitted with underbody domed skid plates that are said to increase downforce by six times over last year when a car is in a 90 degree spin.

The domed skids aim to make it harder for cars to become airborne in the event of an accident such as that endured 12 months ago by three times Indy 500 champion Helio Castroneves.

Last start Phoenix winner Scott Dixon (Chip Ganassi Chevrolet), who ended 10th and one position higher than Will Power (Team Penske) said the domed skids, which have come under fire from some drivers, are a step in the right direction in terms of improving safety.

“On the safety standpoint of the domed skid, it’s a big improvement, especially in the 90-degree yaw,” Dixon, the reigning series champion, said after logging 30 laps in the morning session.

“We’ve got to look at safety before anything.

“Yes, it’s going to make the car maybe a little more difficult (to drive), but every car has a pedal and we have more downforce to put on to compensate for the loss.”

Bill Pappas, IndyCar’s vice president of competition, said the conditions were challenging but did not prevent the series from gathering crucial data.

“We ran through quite a bit of different combinations as part of the aero kit configuration test,” Pappas said.

“The conditions weren’t ideal, but we did get a lot of information to go over and look through over the next couple of days to get ready for the month of May.”

Honda maximised its track time compared to Chevrolet’s signature Penske and Ganassi squads which elected not to run in the afternoon when wind speed increased.

Chevrolet already benefitted from a private test at the Brickyard on April 5.

Graham Rahal (Rahal Letterman Lanigan Honda), who completed 48 laps to be 12th fastest, said teams faced a challenge with the implementation of the domed skids.

“It’s going to take some work to get them to where we need them to be to be raceable,” Rahal said.

James Hinchcliffe completed another quest in his comeback from a near-death accident in practice for the Indy 500 last year by clocking 46 laps in his #5 Schmidt Peterson Honda to be 14th with a 215.36 (346.58) best.