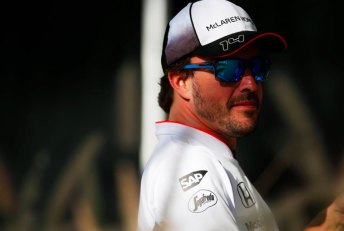 Fernando Alonso has returned to training as he prepares to rejoin the Formula 1 World Championship for the upcoming Chinese Grand Prix.

The Spaniard was denied a start last time out in Bahrain, where FIA medical testing revealed that he had sustained a fractured rib and punctured lung in his horror Australian GP shunt two weeks earlier.

Alonso’s McLaren team is expected to carry out its own scans on the driver before he heads to the April 15-17 Shanghai race, where he’ll again need to pass an FIA test in order to be cleared to race.

“In the next few days, I hope to do also cycling and swim. Step by step.”

McLaren racing director Eric Boullier expects Alonso to race in China, but faces a nervous wait on the final sign-off.

“But he’s going to go through the scans. The FIA will inspect them and decide yes or no.”

Despite being sidelined, Alonso remained in Bahrain throughout the race weekend to work with Vandoorne and the team.

The two-time world champion also took time out to tackle Sky Sport F1 pundit Johnny Herbert on live television after the Brit had called for him to retire in the wake of his latest injury.

“I will not retire, mate,” Alonso said after approaching an on-air Herbert in the paddock.

Herbert had earlier stated that Alonso is past his best and that his style does not suit the latest generation of F1 cars.