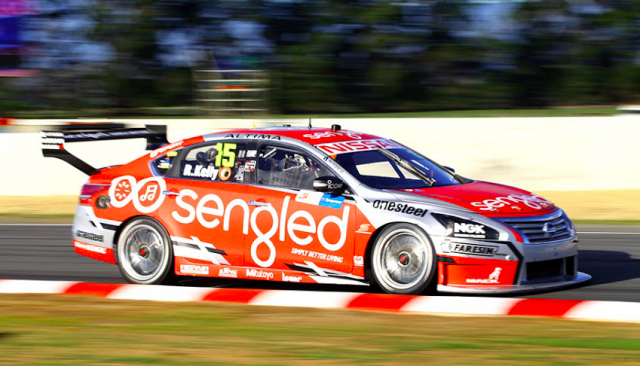 Running at the front of the field at a venue where Nissan struggled in recent years has Rick Kelly confident that his team has taken a genuine step forward this season.

Kelly’s Sengled Altima was one of the fastest cars for the majority of the weekend in Tasmania, turning sixth on the grid into fourth by the end of Saturday’s Race 5.

A strategy play helped the former champion jump from 12th to third early in Race 6, where another top 10 finish was well and truly on the cards before brake problems hit in the final stint.

The performance was a stark contrast to previous years at the renowned power circuit, where Kelly had enjoyed a best finish of just 14th from nine starts in an Altima.

“It’s a pretty significant credit for the guys to get the cars to where they needed to be (at Symmons Plains),” Kelly said.

“If we do a good job, we’ve been able to get well into the top six every race.

“It shows we’ve taken a step forward and we need to capitalise on that.”

Although Sunday’s brake problem dropped him to 12th in points, Kelly says he feels fortunate to have left Tasmania with a straight car after three high-speed offs.

“The third one was at 250km/h and I thought we were going to turn the car from an Altima into a Pulsar,” he said after the brake rotor explosion.

The Nissans are expected to be highly competitive at the next event at Phillip Island, where they were top six runners last November.

Nissan Motorsport general manager Scott Sinclair is confident that the cars can now be competitive at any circuit, but stresses there is plenty of work to do in order to be consistent front-runners.

The team’s inconsistency during the last three years had been largely blamed on a lack of engine performance, which finally appears to have been resolved.

“We will still have good and bad days, but we’re not going into any weekend thinking ‘this is going to suck’,” Sinclair told Speedcafe.com of the squad’s progress.

“We’re working hard to eliminate the excuses we’ve got to have bad events. That’s what we’ve focussed on doing.

“There are a number of things that go into each weekend that affect the way we go.

“For us it’s really eliminating the errors to make sure we do perform at tracks where before we’ve been weak.

“We’ve also got to make sure we don’t go to tracks like Phillip Island complacent thinking we’re going to dominate.”

While Kelly was the standout performer for Nissan at Symmons, team-mates Michael Caruso, Todd Kelly and Dale Wood spent the bulk of the weekend mired in the bottom half of the field.

Caruso salvaged a best of 11th on Sunday, but still slipped from the points lead to ninth across the weekend.

“There were a few differences that we looked at in-depth on Saturday night,” said Sinclair of the disparity between performances across the cars.

“But we saw that with qualifying, if you got your lap in cleanly you had the opportunity to start near the front, which made it a hell of a lot easier.

“That’s what happened (with Rick) on Saturday and then on Sunday we got the clear air through strategy and the other guys were just bogged in the pack.

“Rick’s weekend was certainly encouraging, but we’re not shying away from the fact that we’ve got a lot of work to do.

“We’re on the back of the top 10 in terms of pace, so we need to make sure we work hard to get into the top 10 consistently.”