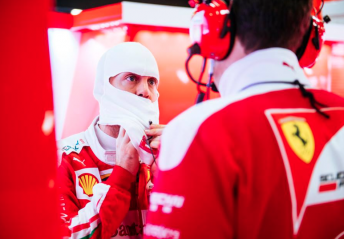 Sebastian Vettel is not in favour of the new qualifying concept

Sebastian Vettel has slammed a proposal to introduce aggregate qualifying to Formula 1 as the sport endeavours to replace the much maligned elimination format.

An aggregate qualifying concept was tabled by the FIA when teams met with the governing body’s president Jean Todt and commercial rights holder Bernie Ecclestone to discuss changes to qualifying on Sunday.

The new direction arrived after the FIA declined to revert to the 2015 qualifying system, which has been the wish of the teams following two embarrassing showings of the elimination system.

Upon hearing the idea, four-time world champion Vettel made his feelings clear by describing the proposal as a ’s*** idea”.

”It’s a good idea if you want random things to happen, but Formula 1 should be about racing. It’s a s*** idea.”

Aggregate qualifying was last used in F1 in 2005 when times from single lap runs on Saturday and Sunday were combined to determine the grid.

However, it is understood the new format would see the best two laps set in each qualifying session combine to form the starting order.

If the format had been used in Bahrain Nico Rosberg would have been on pole, while Lewis Hamilton, who recorded a new lap record in qualifying, would have dropped to third.

Vettel is not alone in his view with Red Bull’s Daniel Ricciardo claiming the proposal goes against the essence of qualifying.

“Qualifying is one lap, that one perfect lap,” said Ricciardo.

“To have an aggregate it starts to sound more like endurance racing or something. I wouldn’t be too keen on that, no.”

However, McLaren’s Jenson Button says he is happy to trial the aggregate system which he feels will be better than the current format.

“If it’s an aggregate system, I’ll give it a go,” said Button.

“Drivers driving around with one eye closed would be better than this one.

“I look forward to change, and that’s what’s hopefully coming.”

Further discussions regarding the possible introduction of the new qualifying system are expected to take place on Thursday.