Home » Misc » Featured News » SVG: It’s going to kill me for the next two weeks

SVG: It’s going to kill me for the next two weeks Shane van Gisbergen has opened up on his costly late mistake and the engine problem that upset his rhythm during Race 5 at Symmons Plains.

The visibly upset Kiwi brushed reporters in the immediate aftermath of the race, which he had been set to win before sliding off on oil with five laps remaining.

Speaking with the NZ Herald’s Driven Hour after returning home to the Gold Coast, Van Gisbergen says he’ll be lamenting his misjudgement of the track condition until the next round of the championship at Phillip Island.

The 26-year-old was told by his team of the fluid on his way down to the Turn 4 hairpin, but failed to slow sufficiently amid efforts to hold out second placed Mark Winterbottom.

Winterbottom, who said he had no warning of the oil from his team, also ran wide but avoided the gravel, rejoining third behind Will Davison and Craig Lowndes.

“I’m my harshest critic and I’ve replayed that so many times in my head,” said Van Gisbergen.

“I did brake early and I went to the inside but I didn’t brake enough.

“I had Frosty quite close behind me and I didn’t want to give up too much time.

“It’s a hard one. It was my fault completely, but it was pretty hard to avoid it being the lead car.

“It’s going to kill me for the next two weeks until we go racing again, but it’s happened and the positive is that we were the quickest car all weekend.

“We’ll just work hard and hopefully when we get to Phillip Island the momentum will carry on.” 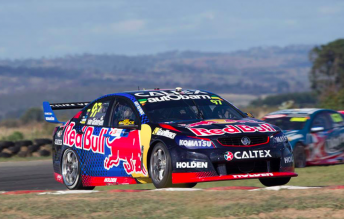 Van Gisbergen had set the pace throughout the weekend

Van Gisbergen’s horror was completed by the fact that, despite trying for several laps, he could not extract his car from the gravel trap.

“I was desperately trying to get out but it was just hooked up under the gravel,” he said.

“It’s so thick there for safety, they’ve done a good job with all of the improvements, but it was my undoing. I couldn’t get out.”

Van Gisbergen and Winterbottom had been locked in combat throughout the race, trading paint in the middle stint.

Although downplayed by team manager Mark Dutton post-race, Van Gisbergen said that an engine problem had been hampering his rhythm in the car.

“When I had those couple of brake lock-ups we were fighting quite a bad engine issue,” he said.

“I pulled a little bit of a lead and was quite comfortable but then the engine starting playing up quite bad, which it did on Saturday also.

“He caught me right back up and I was struggling with trying to get the engine right and kept making mistakes.

“Then I pulled away again, but we know what happened at the end with the oil.”

“I was pretty pissed off at myself, but to see all of them smiling, it was bittersweet, but I’m stoked for them,” he said.

“They’ve had it pretty tough (with former manager Steve Hallam leaving) but to still have a competitive car and a competitive driver is a pretty good way to leave them.”

Van Gisbergen slid from the lead of the championship standings to seventh with his mistake, 70 points behind new front-runner Davison.