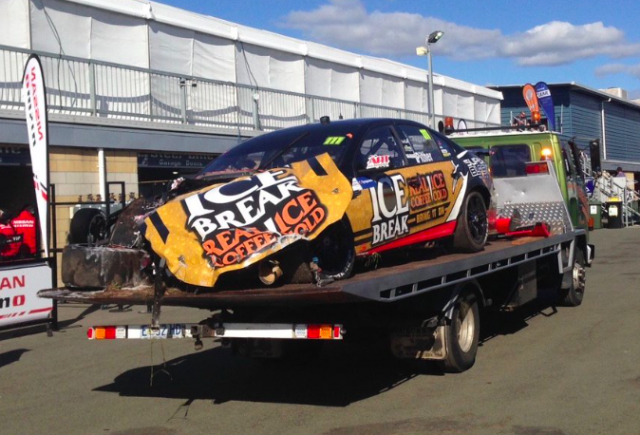 Pither’s Super Black Ford suffered front-end damage when it was turned into the inside armco at the exit of the Turn 4 hairpin in the early stages of Sunday’s race.

The chassis being used by Pither had been scheduled to return to the Dunlop Series at Phillip Island after winning the Adelaide season opener in the hands of Garry Jacobson.

Pither was switched into the Dunlop Series car after heavily crashing his primary chassis at the Clipsal 500.

That car will be ready to return to the track at Phillip Island but, according to team principal Tim Edwards, the availability of the Symmons Plains wreck is yet to be determined.

Prodrive needs six chassis to take to the Victorian venue due to the second round of the Dunlop Series taking place alongside the main show.

“We don’t really know until we get it back and can properly assess the state of the chassis,” Edwards told Speedcafe.com.

“Obviously there’s a lot of bolt-on stuff that’s destroyed, but it’s a bit early to say whether the chassis sustained any serious damage.

“We won’t make the decision on what we’re doing until we’ve got this car apart.”

Hopeful that Pither’s Symmons wreck can be quickly repaired, Edwards says that he’d prefer to hold back the new car if possible.

“It was originally scheduled to come online for Phillip Island, but unfortunately we’ve been a bit busy over the last month repairing Adelaide’s carnage, which set us back a little bit,” he said.

“It was going to be for Frosty (Mark Winterbottom), but he’s in no burning desire to change, there’s nothing wrong with his current car.

“It’s a built shell with plumbing and wiring in it, but it’s not finished and we don’t really want to rush it.”

The team already debuted a new car for Chaz Mostert in Adelaide, which effectively replaced the chassis that was written off in last year’s horrific Bathurst qualifying crash.

While Prodrive submitted a series of recommendations to FIA circuit inspector Tim Schenken following Pither’s Adelaide accident, Edwards says he sees no reason for action over the fencing at Symmons Plains.

Pither’s Ford made contact with the back side of the armco that runs along the entry to Turn 4 after spinning up the banked stretch of infield grass.

“It’s just an unusual one,” said Edwards of the incident.

“But I don’t think they need to be looking at it because I’ve never seen a car go in there like that before.

“They’ve done a lot of work around here and need to be commended for what they have done.”

Pither had been left stunned by the crash, which came after contact with Nick Percat.

“I just got slammed into at the apex of the hairpin which killed the run off,” he said.

“Nick tried to take advantage of that, but they’ve made it clear to us that you can’t bump and run somehow.

“I’m pretty disappointed to be honest.”

Officials took no action over the incident, which triggered a Safety Car period on just the fifth lap of the 84 lap contest.