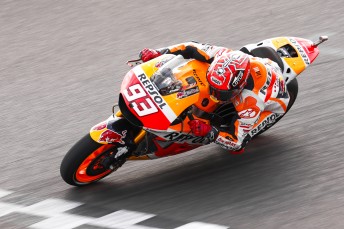 Marc Marquez has won a bizarre flag-to-flag Argentina MotoGP while Jorge Lorenzo was one of several high-profile riders to crash out of the running.

A flag-to-flag format was sanctioned by Race Direction following concerns over the Michelin tyres.

Lorenzo jumped best from the start but that was about as good as it got for the defending world champion, who had dropped to fifth by the end of the opening lap.

Both Repsol Hondas were lucky to even make it out of the first corner when Ducati’s Andrea Iannone arrived with too much speed, clipping Marquez and forcing Pedrosa to stand up and run wide.

Meanwhile, the sister factory Ducati of Andrea Dovizioso broke away with Rossi and Marquez to battle for the lead early on, while Jack Miller charged from 15th on the grid to sixth before falling on Lap 4.

Lorenzo dropped his Movistar Yamaha two laps later, by which time Marquez had shaken off both Italians for the time being.

Rossi pulled out consecutive fastest laps to close up to the rear of Marquez when the pair pitted at the halfway mark, but the Honda disappeared thereafter.

Rossi appeared to have a slightly slower bike change and was held up by Tito Rabat upon re-entry, but it meant little as the 2015 race winner struggled for pace and was caught by Maverick Viñales.

Rossi, now seven seconds adrift of Marquez, attempted to respond as the Suzuki rider behind fell after touching a damp patch left by earlier rain with two laps remaining.

The factory Ducatis, which had been trading places for much of the race, were already on for at least a podium between them.

Iannone got under Rossi on the penultimate lap which took both wide at Turn 5, and Dovizioso helped himself to second position.

The #29 pilot wasn’t done yet, coming at his team-mate at the second-last corner of the race but only succeeding in taking down both red bikes.

Iannone was later issued with a three place grid penalty for causing the crash.

Ironically, that allowed Pedrosa onto the podium after his costly opening corner delay.

Marquez meanwhile had cruised to a 7.7s victory to lead the championship.

“The first part of the race was difficult, because the track was still wet and especially with the first bike I didn’t fare good,” he recalled.

“But on the second bike I knew was key, on my first five laps with the new tyres I pushed 100 percent, opened up the gap, and just kept the distance.”

Rossi’s best result since Japan last year places him second in the standings.

“At the beginning I struggled a bit but after I got my rhythm I was fast, I could fight with Marquez, and we started to have fun,” he explained.

“With the second bike I never felt the same, I wasn’t able to ride it like the first, and without the Ducatis touching I can’t arrive on the podium.

“It is a great result, very very important points, and I am so happy because it is the first podium of the season.”

Eugene Laverty emerged fourth ahead of Hector Barbera, while Pol Espargaro claimed sixth despite running through the grass on the final lap.

A total of seven riders crashed, Aleix Espargaro salvaging 11th after he (and Cal Crutchlow, separately) fell at Turn 1 on Lap 2, while Dovizioso was the last of the finishers in 13th.

The championship moves to North America next weekend, at Austin from April 8-10.