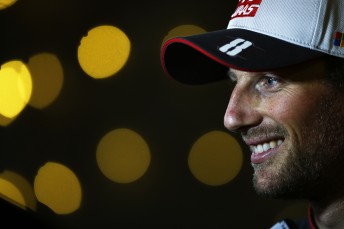 Romain Grosjean has hailed the performance of the new Haas F1 car as the team’s stunning start to its debut season continued in Bahrain.

Fresh from scoring a sixth on the team’s Formula 1 debut at the Australian Grand Prix, Grosjean produced a second standout drive as he bettered his Albert Park result with a fifth at the Sakhir circuit.

The Frenchman, who started from ninth, made the most of an aggressive three stop strategy that saw him produce impressive speed during two stints on the super-soft tyres.

Delighted by the start to the season, the former Lotus driver believes there is more to come from the car, but admits the American operation must keep its expectations in check.

“It was unbelievable fighting with the Williams, Red Bulls and Toro Rossos,” said Grosjean.

“I didn’t have any issues, I could drive the car the way I wanted on an aggressive strategy on the super-soft tyres.

“There are plenty of areas where we can improve but this (continues) the dream debut.

“I’m very happy in the car, I have big confidence in the braking, which allows me to attack. I very much love the platform in the car and systems inside. It allows me to unlock its potential.

“Now we have to keep our feet on the Earth.”

Grosjean is tied for fourth in the championship standings with 18 points ahead of the Chinese Grand Prix from April 15-17.