Davison: Consistency the next step for Tekno 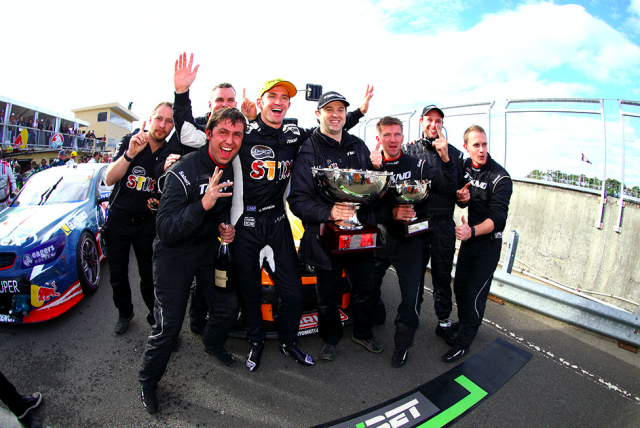 Davison celebrates with the Tekno crew

New V8 Supercars Championship leader Will Davison says he must focus on extracting consistent speed from his Tekno Holden before thinking about a title challenge.

Davison shot from 15th in points to the lead across the Symmons Plains weekend thanks to a third and a victory across the two heats.

The results were an emphatic response to uncertainty over the squad in the wake of former team manager Steve Hallam’s shock departure just prior to Easter.

Davison was one of the quickest in every major session at Symmons Plains, missing out on pole position yesterday only due to a grid penalty for impeding James Courtney.

Last leading the championship during his 2013 season with Prodrive, Davison ended the last two years 14th and 15th in points while driving for Erebus Motorsport.

The driver took a major pay cut to join Tekno over the off-season, trading in the last two years of a multi-million dollar deal with Erebus in order to steer their Triple Eight equipment.

“It feels good when you’ve had two years of struggling to be in the top 15,” said Davison of his points lead.

“It’s good to say, but it just means we’ve had a good weekend this weekend.

“It (the championship battle) won’t start taking shape until halfway through the year.

“There’s a long way to go so I’m not going to talk championship, but it’s a nice feeling.”

Davison stressed the need to back up his Symmons Plains form, with consistency across the season a major issue for Tekno under previous driver Shane van Gisbergen.

“We’ve got to be consistent top five challengers, that’s the aim of the game,” he said.

“We’ve had a great weekend but we’ve got to keep backing it up at other circuits.

“Getting a win early is a big relief, it takes pressure off, but consistency is what it’s all about.

“The first two rounds were a bit tough for me adapting, but I could always feel the promise in the car.

“We’ve put it all together on quite a strong circuit for these cars, but there are not many circuits around where these boys haven’t been quick in the past.

“It gives us confidence but I’ve got to keep adapting my style and tune the car to me.

“It’s fun going to races knowing you have a shot to win again. Words can’t describe how good it feels.”

Although shocked by Hallam’s exit, Davison reiterated his feeling that the team will not be impacted by the departure.

“This sport throws curveballs and I’ve learnt not to worry about things that you can’t control,” he said of Hallam’s move.

“It was strange news early in the year, but I had some good chats with Jono and the key people there and felt really comfortable with what is going to happen going forwards.

“I’ve got confidence in the guys. I’m definitely in a great place still. It’s all good.”

Next Story POLL: Who impressed you most at Symmons?