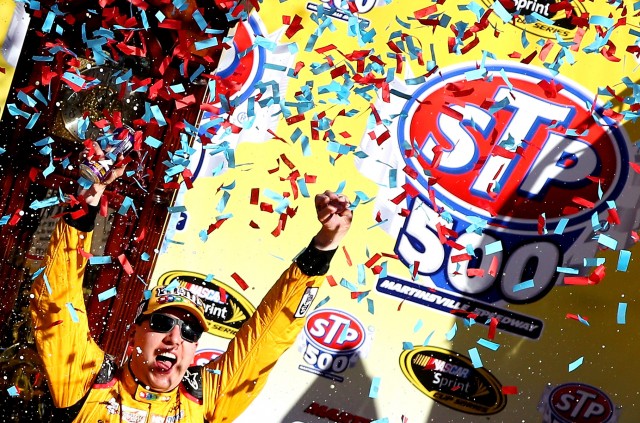 Kyle Busch was thrilled with his win at Martinsville

Kyle Busch scored his first win at the famed Martinsville Speedway with a measured drive at the track known as the “Paperclip.”

Even a late race caution couldn’t stop Busch, who did not pit while others took a mixture of two and four tyres.

He led a total of 352 of the 500 laps run on NASCAR’s shortest track. It was an impressive weekend for the younger of the Busch brothers, as he also won the Truck Series. Prior to the weekend he had not won at Martinsville in Cup, XFinity or Trucks.

“It certainly helps when you get to run other divisions, and that’s why I do it – to pay off on Sundays. It doesn’t work every single weekend, but it works more times than it doesn’t,” said Kyle Busch.

“To win here in Martinsville is pretty cool, you know. Finally get to take a clock home. A lot of people said I didn’t deserve one yesterday, and maybe I don’t. But I certainly got one today.”

Busch also had plenty of praise for his team, which gained positions during stops and made mid race adjustments to the car.

“That was huge, the race off pit road. My guys were flawless today,” said Busch.

“We made a few adjustments to the car throughout the day, and they kept getting me out and not even losing a spot on pit road. That was the key to the race, being able to restart on the bottom (lane) like that.”

Good results for a number of drivers with AJ Allmendinger in second, followed by Kyle Larson, Austin Dillon and Brian Vickers.

Of the notables not to score highly was points leader Kevin Harvick in 17th, while a cut tyre in the opening laps meant Dale Earnhardt Jr. had to fight his way back to 15th.

One of the pre-race favourites was Denny Hamlin, but he lost control of his on Lap 220 and hit the outside wall hard. He finished 39th.

From short track racing, it’s onto one of the fastest tracks at Texas Motor Speedway for Saturday night race next weekend.