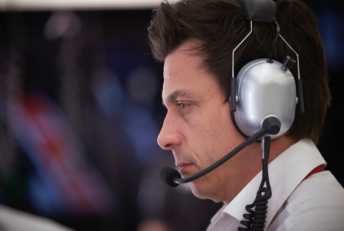 Mercedes boss Toto Wolff has urged Formula 1 to revert to the previous qualifying format after the new elimination system failed to deliver in Bahrain.

Following an embarrassing debut at Albert Park, the controversial elimination concept was given a second chance at Sakhir but produced similar results, highlighted by large portions of track time without any cars on circuit.

Teams voted to scrap the system at Albert Park but resistance from the FIA saw an alternative option tabled for this weekend, which failed to achieve an unanimous agreement.

Despite snaring a second consecutive front row lock out, Wolff says F1 cannot afford to persist with this format for another race.

The Mercedes boss believes the concept has failed to deliver a shake up of the grid and is too complex to follow.

A meeting to discuss changes to qualifying featuring the teams and the FIA is scheduled before the Bahrain Grand Prix.

“It’s very difficult to follow as to who is in and out, and we have a duty to simplify the sport rather than add complexity.

“It doesn’t mix up the field enough that would make the race more entertaining, so I hope we can have some reasonable discussions on Sunday.

“When I have spoken to Jean Todt last week he said he wanted to approach it in a structured way and he thinks that Q1 and Q2 there is maybe something to learn and therefore he’d rather go for the hybrid version once again to find out if it’s all bad.

“If we realise that it’s all bad then probably the most realistic scenario is to go back to the 2015 scenario.

“I think we are not in a position any more now that we have run it twice to do experiments for Shanghai, because we would look like fools.

“If somebody puts a block in the system to make us stuck we should publically crucify him in the paddock.”

A unanimous agreement from the teams and the FIA will be required before any changes to qualifying can be ratified for the Chinese Grand Prix from April 15-17.