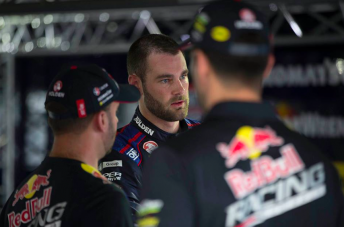 The race leader was one of several to slide off on oil dropped by Cameron Waters’ Prodrive Ford, which suffered an engine failure leading into the Turn 4 hairpin.

What appeared a certain victory turned into a DNF for the Kiwi as he ultimately failed to extract the #97 Red Bull Holden from the gravel trap.

Declining to be interviewed post-race, Van Gisbergen was left to lament the lost win and points, which sees him slide from the lead down to seventh in the championship standings.

“We had really great pace and pulled away, but I just mucked up at the hairpin where the oil was and I just couldn’t stop and got stuck,” he said in a team statement.

“So, 150 points down the toilet really. We had fast cars all weekend, we were the quickest, it’s a real shame that it ended that way.”

Red Bull team manager Mark Dutton confirmed to Speedcafe.com that Van Gisbergen was warned of the oil before arriving at the corner.

“He slowed down and changed his line to try and avoid it, but he appeared to just get it.

“It’s gut wrenching. Yesterday was his first win ever here and to be in that position and leading the championship… he’s gutted.”

Prodrive’s Mark Winterbottom had been running second at the time of the chaos and, while also running wide, managed to recover to take third behind Will Davison and Craig Lowndes.

“I got told at the exit of the hairpin,” laughed Winterbottom when asked how much warning he had.

“I couldn’t see the (slippery surface) flags because I was jammed up Gizzy’s tail.

“I braked when he did and that extra two metres got me back on the track and into third.” 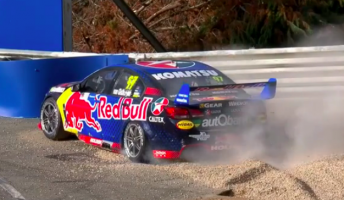 Van Gisbergen failed to extract his Holden from the gravel

Waters had been nursing a sick engine throughout his final stint after a sensor failed and needed to be replaced in the garage at the second stops.

Prodrive team principal Tim Edwards told Speedcafe.com that the engine’s timing was likely out due to the sensor change, eventually leading to the mechanical failure.

“It wasn’t running very well and he was driving with half-throttle and using the clutch to change gears,” said Edwards.

“He was nursing it so that we didn’t have a mechanical issue, but completely out of the blue it had a failure, probably as a result of running too lean or the timing not being quite right.”

Van Gisbergen had endured engine concerns of his own around the second pitstops.

Dutton however insists that the problem was not a distraction to his driver in the closing stages.

“Once or twice it was a little bit fluffy, but it wasn’t ongoing,” said Dutton of the engine.

“We’ll have to analyse and see what exactly caused it.

“There’s so many sensors hooked up to different things that something unrelated to the engine could have caused it.

“We were watching it like hawks, but it wasn’t an issue (when Van Gisbergen went off).”

Both Red Bull Holdens ended up in the Turn 4 gravel as a result of Waters’ oil, with Jamie Whincup sliding into Andre Heimgartner’s parked Holden amid the chaos.

Whincup’s race had come unstuck at the same corner almost 40 laps earlier on a day to forget for the six-time champion.

“I made a rookie error, locking a wheel on cold tyres, and I ended up in the gravel trap,” Whincup explained.

“I then found myself in there a second time, going into another car in the gravel trap and doing damage to the car.

“Just gutted, gut-wrenching for the team. We had two fast cars all weekend and to walk away without a result is hard to take.”

Next Story Davison: Consistency the next step for Tekno