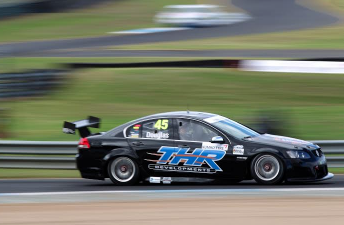 Former V8 Supercars full-timer Taz Douglas made a prefect start to his Kumho V8 Touring Car Series campaign by taking out the round win.

The 2014 Bathurst 1000 runner-up surged to two wins on Sunday after being declared the victor of Saturday’s opening race following a decision from officials.

Saturday’s encounter was originally declared a non-event after six laps due to safety concerns over the circuit following an oil spill.

However, the decision was reversed handing Douglas the win from Chris Smerdon and Steve Briffa.

Douglas was made to work hard for his double triumph on Sunday, having to come from behind in both races.

In Race 2, he fought his way by the fast starting Jim Pollicina to come home ahead of Dunlop Series regular Bryce Fullwood and debutant Tyler Greenbury.

The trio shared the podium in the final race with Douglas’ THR Commodore holding off Fullwood’s Matt White Motorsport prepared Holden by 0.2s. 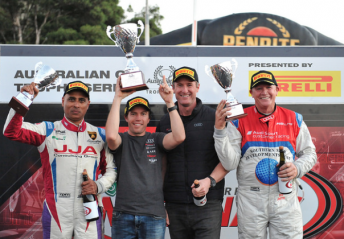 The Audi R8 duo completed a relatively comfortable victory in the first 40 lap heat as the pair led home the MARC V8 entry of Jake Camilleri and the Audi R8 of Rob Smith.

However, Mawer was forced to produce a stunning comeback drive in Race 2 after being hit with a drive-through penalty following a pit stop infringement.

The penalty saw Mawer rejoin the race in ninth with 20 minutes remaining, but this failed to prevent him from storming through the field to take the win.

Camilleri once again came through to finish second with the Lamborghini of Matthew Turnbull in third. John Bowe on his way to victory in Race 2

After being forced to follow Jim Richards home in Saturday’s opener, Bowe produced a faultless lights-to-flag drive to win Race 2.

Richards had held second for the majority of the race before falling into the clutches of Steven Johnson’s GTHO Falcon.

Johnson eventually found a way through to second leaving Richards to settle for third ahead of Tony Karanfilovski, Mark King and Eddie Albenica.

Greg Ritter and Glen Seton surged from the back of the grid to seventh and eighth respectively.

Andrew Fisher won the reverse grid finale from King and Bowe, who fought his way from the rear of the field. 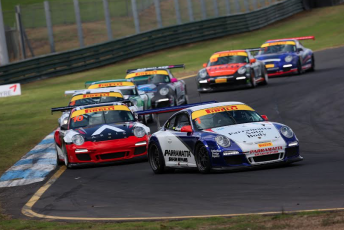 The defending series winner made textbook starts to both races before going on to record a pair of lights-to-flag victories.

Hardeman followed Simpson home in both of today’s races, finishing ahead of Jaxon Evans in Race 2, while Tim Miles took the final podium place in Race 3.

The impressive display from Miles in Race 3 helped him take out the round win in the Elite Class.

Three class wins for Daniel Stutterd saw him leave the weekend with the Class B round honours. 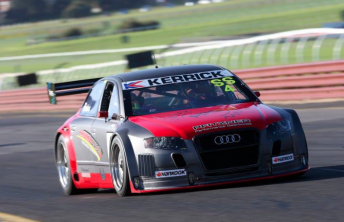 Perkins defeated Tony Ricciardello in the first encounter as he guided John Gourlay’s Audi to the flag with a six second lead over the reigning champion.

He repeated the feat in the final race as he clinched the Des Wall Trophy race from David Wall, who finished third in the earlier race.

Wall was competing in a one-off entry behind the wheel of his dad’s Corvette in a bid to win the race named in honour of his late father. 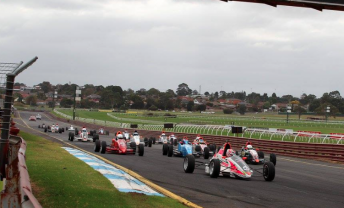 The Sonic Motor Racing driver came through an entertaining battle with Jayden Ojeda and Adrian Lazzaro which saw the trio all enjoy spells in the lead.

In end, Tander clinched the win by 0.7s from Ojeda with Lazzaro finishing third.

The pair were involved in a hard fought dice in the day’s first race which saw Anthony take the chequered flag by 0.4s, with R-Tek Motorsport’s Roland Legge crossing the finish line in third.

Macrow was victorious in the final race of the weekend with a 1.1s margin over Anthony.

Cameron Shields secured the final place on the podium which had been held by Legge until lap 5.

Roger I’Anson came through to win both Sports Racer encounters with the West driver leading Joshua Townsend home on both occasions.

While I’Anson starred, it was Townsend who left the meeting with the series lead after scoring three second place finishes.

The Shannons Nationals head to Phillip Island for round two from May 27-29.