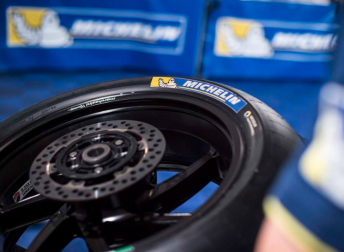 Michelin has withdrawn its medium and hard compound tyres

Michelin has issued MotoGP teams with a new specification tyre after electing to withdraw its existing compounds following Scott Redding’s failure in Argentina.

The French tyre firm will continue its investigation into the failure which struck Redding during Free Practice 4 causing damage to the rear of his Pramac Ducati.

The incident forced qualifying be delayed for 30 minutes while a preliminary investigation into the incident was carried out.

Michelin has now taken the decision to withdraw all of its medium and hard rear tyres and replace them with a compound made to a different construction.

“Redding’s tyre – a medium compound with seven laps on it – is still being examined by Michelin’s technicians to determine the cause of the fault,” read a statement from MotoGP.

“Until this can be determined, Michelin has decided to withdraw both rear tyres on safety grounds, and introduce the extra “special” rear compound brought for such an occasion.

“Each rider will have four of these rear tyres for Sunday.

“The reason both current tyres must be withdrawn is because they are both of the same construction, meaning that there is a possibility of a similar failure on the harder tyre.

“Michelin’s new rear tyre to be introduced from Sunday is of a harder construction, and will cope better with the hard strains and temperatures put through it – albeit at the expense of lap times.”

To allow teams to adjust to the new rubber an extra 30 minute warm up session has been added to the schedule.