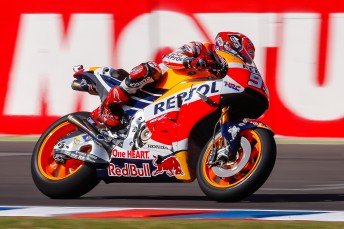 Marc Marquez has sizzled to pole position for the  MotoGP Grand Prix of Argentina after qualifying was delayed due to a tyre failure for Scott Redding.

Free Practice 4 was halted just beyond the 10-minute mark after an apparent failure of the medium compound rear tyre on Redding’s Pramac Ducati at the fast Turn 6.

Marshals cleared debris during the short delay before a second red flag upon the return of the Pramac Ducati to the pits allowed officials to make preliminary investigations into the cause of the incident, which also damaged the bike’s seat.

Riders were allowed to complete the final four minutes of the half-hour session on any tyre compound.

Michelin has since withdrawn all of its rear tyres and has replaced them with a new batch of medium compound rubber.

Marquez set the pace upon the commencement of qualifying, which was delayed by 30 minutes, shooting to a 1:39.411 on his first timed lap.

That was the fastest lap of the weekend, and indeed no other rider had lapped under 1:40s until Valentino Rossi managed to do so at the end of his first run.

Jorge Lorenzo, riding his spare bike after a crash late in FP4, dislodged his Yamaha team-mate after the chequered flag before Rossi returned the favour seconds later, but neither were close to Marquez.

That was just as well for the Repsol Honda Team rider, who crashed heavily at Turn 1 in the final minute of the session.

“This one was a big one but I am okay,” said the Spaniard of the crash.

“I think we are working really good, I feel really good with the bike, it was just a little mistake on the first corner and I lost the front because I pushed a little bit more.”

Dani Pedrosa, Andrea Dovizioso, and Andrea Iannone share the second row, the former having gone third late in the session before being usurped by the factory Yamahas.

Jack Miller narrowly missed out on direct qualification for Q2 and instead crashed twice during Q1 on his way to 15th on the grid.

Redding returned to the track during FP4 and finished Q1 in fourth position, placing him alongside Miller in the middle of the fifth row.

Officials are expected to review tyre options before tomorrow’s 22-lap race, which starts at 0500 Monday (AEST).