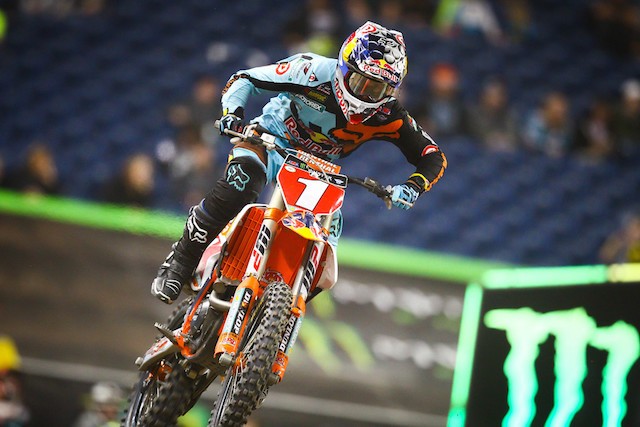 Championship leaders Ryan Dungey and Cooper Webb continued their dominance by collecting victories in Round 12 of the Monster Energy Supercross at Levi’s Stadium, Santa Clara.

Dungey weathered storms created by Ken Roczen and Jason Anderson during the early stages of the main event to notch another main event win and gain valuable points as he inches closer to his third championship.

Roczen and Anderson continue to keep their championship hopes alive, with a second and third place respectively.

Troy Lee Designs KTM rider Mitchell Oldenburg rounded out the top five after a large battle with Colt Nichols and Jordon Smith in sixth and seventh.

Dungey extends his series lead to 278, followed by Roczen with 236 and Jason Anderson with 220.

Webb increased his lead to 170, followed by Savatgy with 154 and Christian Craig with 147.

Monster Energy Supercross returns to the east coast next weekend, as Lucas Oil Stadium in Indianapolis hosts round 13 of the championship.