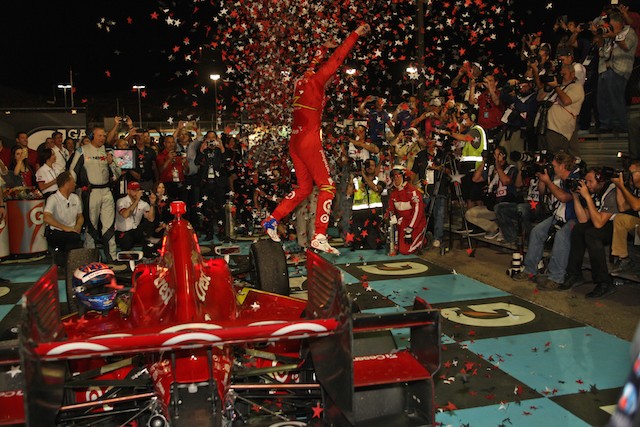 The New Zealander blistered to victory after 250 laps under the floodlights at the short oval as the Chip Ganassi stalwart was one of only three drivers to lead the race.

In a classic Ganassi/Team Penske dogfight, the four-time IndyCar Series champ defeated Simon Pagenaud and a resurgent Will Power.

The victory realised Dixon’s 39th career win which moves him to equal fourth with Al Unser on the all-time list.

Montoya had taken over the running after his Penske team-mate and polesitter Helio Castroneves had earlier been taken out of the lead when his right front also failed.

Power had quickly sliced his way high into the top 10 and had shadowed Dixon, however Ganassi’s reigning series champ proved untouchable.

“Right now I’m just so happy for the team. It is the first win for the team at Phoenix,” Dixon said.

“The car was super fast. We got a lot of it done on strategy.

“We definitely had our bad luck at St Pete (opening round in Florida) with our overheating issues.

“It’s IndyCar; it’s tough, but you’ve got to take your points wherever you can.”

After looking competitive throughout Tony Kanaan produced a late race surge for fourth ahead of Graham Rahal and Josef Newgarden.

Max Chilton had an impressive race, his first on an oval in an IndyCar, to finish seventh with Sebastien Bourdais, Juan Montoya and Ryan Hunter-Reay completing the top 10.

Hunter-Reay grazed the wall with less than 10 laps remaining which saw a piece of his wing fly from the car however officials elected not to throw a caution immediately.

The former series and Indy 500 champ pulled off some courageous overtaking moves throughout the race but lucked out during yellow flags, describing his 10th as ‘gut-wrenching’.

With two laps remaining the caution was in fact given, ensuring the race fizzled to an anti-climatic conclusion.

After winning the series opener, Montoya relinquishes the points lead to team-mate Pagenaud with the Colombian slipping to third as Dixon moves into second.