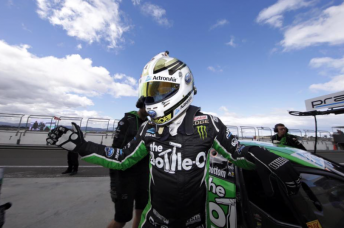 A two-place grid penalty for impeding James Courtney has denied Will Davison pole position for Race 5 of the V8 Supercars Championship at Symmons Plains.

Davison set the fastest time of the 30 minute session, shooting to the top with a 51.02s best just 30 seconds from the chequered flag.

The Tekno driver, however, was immediately docked two spots for blocking Courtney at the beginning of the final run.

Courtney was forced to slow and squeeze down the inside of the slow moving Davison on the run to Turn 4 as he began his first flying lap.

“I had no idea he was there,” said Davison.

“The last time I looked in the mirror I had three cars who came out of the pits behind me very slowly.

“We got pole, we had the fastest car so I’m really happy with the lap I did to get the pole position.

“There was no blocking on my behalf. It’s as simple as that.”

Courtney ended up 19th but refused to blame the incident for his struggles.

“It didn’t really cost us much,” Courtney shrugged.

“The car is embarrassing really, it’s nowhere near where it should be. We just wobbled around at the back.

“We’ve got a lot of work to do to find out what’s going on. Something in the rear is just not gelling with the front. It’s puzzling.”

Davison will share the second row with Jamie Whincup, while Lee Holdsworth backed up his Saturday qualifying speed with fifth.

Whincup had led Davison, Chaz Mostert, Winterbottom and Van Gisbergen ahead of the final tyre run, where the six-time champion and eventual sixth placed man Mostert both failed to improve.

* Two spot penalty for Will Davison for impeding James Courtney