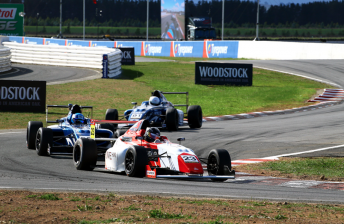 Brenton Grove soaked up late pressure from the recovering Will Brown to claim a victory on his first appearance in the CAMS Jayco Australian Formula 4 Championship at Symmons Plains.

Grove inherited the lead on the opening lap when his Team BRM team-mates Brown and Jordan Love, running first and second, were taken out by an out of control Nick Rowe at the Turn 4 hairpin.

This incident saw the Safety Car deployed to recover the stricken Love from the Turn 4 gravel trap.

Pole-sitter Brown managed to recover from the contact with Rowe, who was handed a drive-through penalty, to rejoin the back of the field.

Eager to recover the lost ground, Brown scythed his way through the field to find himself in second before reeling in Grove in the closing laps.

Grove faced extensive pressure from Brown in the final laps as the latter tried to find a way back into the lead.

In the end, Grove produced an impressive display to hold Brown out to score a win on his Formula 4 debut.

Brown was lucky to hold on to second following a mistake at the final corner which allowed Denton to challenge on the run to the flag.

McGregor came home in fourth ahead of Everingham, Rowe and Josh Conroy, who competed the classified finishers.

The championship will resume on Sunday with two 14 lap races. 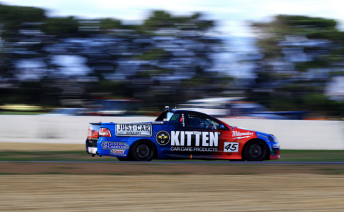 Craig Dontas produced a stunning come from behind drive to score a victory in the V8 Utes Racing Series reverse grid race.

The entire 15 car field was reversed for the day’s second 14 lap encounter which saw Dontas power through the field having started from eighth on the grid.

A fast start saw the South Australian move up to fifth on the opening lap before passes on Danny Buzadzic, Nandi Kiss and Troy Dontas led to a move for the lead on lap 6.

Once passed Layton Barker, Dontas cruised to the chequered flag while Nathan Pretty fought his way from 13th on the grid to finish second.

Barker, who led the opening six laps, settled for third ahead of Kris Walton, David Sieders and Ryan Hansford.

Luke Spalding was absent from the race after being forced to sit out due to pain caused by a recent surgery. He is expected to return to action for Sunday’s 21 lap third heat.

Walton took victory in the opening race of the weekend with a measured lights-to-flag drive.

The 2014 V8 Utes champion grabbed the lead on the run to the first corner from pole-sitter Hansford.

Walton went on to open up a healthy lead before Hansford reeled him in midway through the race.

A tense final few laps followed as Pretty and Sieders joined the duo in a four way battle for the win.

However, Walton held his nerve to take the chequered flag from the trio.

Jason Bell survived early pressure to record a comfortable win in the opening HQ Holden race of the weekend.

The polseitter lost the lead at the start to Duance Preece which helped Shane Ashlin latch onto the back of the top two.

The lead battle quickly turned into a two horse race when Ashlin suffered a mechanical problem and dropped down the field on lap 3.

Two laps later Preece suffered a mechanical drama handing the lead to Bell, who went on to take the chequered flag.

The fight for the podium places proved to be entertaining as a late move from Noel Clark saw him snatch second from Phil Ashlin at the final corner.

The HQ Holdens return for two more races on Sunday.