Jim Richards came through a tense battle with John Bowe to score victory in the opening Touring Car Masters race at Sandown.

The AMC Javelin driver, who started from third on the grid, jumped Bowe’s Holden Torana at the start before inheriting the lead when pole-sitter Greg Ritter was forced to retire on the second lap with a blown engine.

Ritter’s demise saw an enthralling dice between Richards and Bowe develop for the lead.

The pair battled hard throughout the race but it was Richards who just held off Bowe by 0.2s at the flag.

Steven Johnson claimed the final place on the podium in the Synergy Race Engines GTHO Falcon after shadowing the lead two for the entire race.

Tony Karanfilovski was the first of the Pro-Am runners home in fourth behind the wheel of his Ford Mustang.

Friday’s pace setter Glenn Seton retired after three laps with damage to the front of his Ford Mustang. Leanne Tander on her way to victory

Leanne Tander made a strong start to her Australian Formula Ford Series campaign by taking a win and a second place from today’s two races.

Tander dominated the opening race of the season as the Sonic Motor Racing driver took the win by three seconds from Jayden Ojeda, with Adrian Lazzaro in third.

Ojeda and Tander were involved in a race long dice swapping positions for the lead on several occasions in Race 2.

In the end, Ojeda took the spoils pipping Tender by 0.1s at the flag as Sonic Motor Racing’s Max Vidau took third.

Reigning Porsche GT3 Cup Challenge champion Ryan Simpson kicked off his title defence with a commanding victory in the opening race of the season.

Starting from second on the grid, Simpson made the perfect start and was never headed on his way to a comfortable victory over his teammate Hamish Hardeman and pole-sitter Jaxon Evans.

Once in the lead Simpson broke Jon McCorkindale’s lap record five times to leave the new benchmark standing at 1:11.3691s.

Tim Miles won the Elite class after erstwhile class leader David Ryan crashed at turn seven with two laps remaining in the race, while Daniel Stutterd stormed to the Class B victory ahead of Michael Tsigeridis. Josh Smith led until the race was abandoned

Brad Jones Racing’s Josh Smith was leading the encounter before oil on the circuit saw him spin into the gravel trap at Dandenong Road.

The Safety Car was deployed before race control abandoned the race due to safety concerns over the condition of the circuit.

The race was declared with no results posted as some cars crossed the finish line while others elected to come into the pits.

Smith will start on pole position for Race 2 on Sunday.

Perkins claimed the win by 0.7s from the Ricciardello’s Alfa Romeo, while David Wall secured the final place on the podium.

The Sports Sedans will tackle two races on Sunday culminating with the Des Wall Trophy encounter.

Tim Macrow completed a lights-to-flag win on his return to the Australian Formula 3 Championship.

The two-time champion made no mistakes from pole position as he went on to cross the finish line ahead of Chris Anthony, with Trent Shirvington in third. 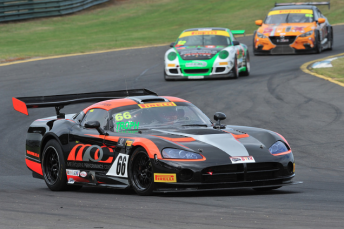 Garth Rainsbury and Ben Porter claimed pole position for the inaugural round of the Australian GT Trophy Series.

The MARC Cars entry of Morgan Haber and Jimmy Vernon pipped the sister entry of Jake Camilleri to third.

Jason Makris was victorious in the Sports Racers as he took the flag by 0.5s from Josh Townsend and John Morriss.