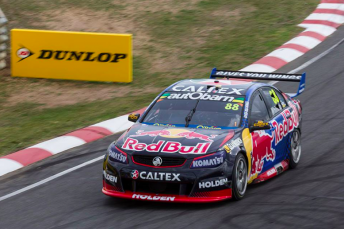 Jamie Whincup in action during practice

A succession of dull 60km heats at the start of last season saw tyre rules quickly tweaked in a bid to spice up the action, before the off-season move to migrate to a single Saturday race.

Symmons Plains is the first of eight events to run the Super Sprint format this season, which again sees a 200km race on Sunday.

The 120km encounter will include a compulsory stop for four tyres, while the decision of whether or not to also add fuel will be left up to the teams.

It is expected that the majority will add fuel in order to safely get to the end, as around five seconds worth is able to be added while the tyre change is taking place.

According to six-time champion Jamie Whincup, the fact that the positioning of the refueller slightly slows down the left-rear tyre changer could, however, tempt teams to squeak through without a splash.

“Everyone is pretty well touch and go,” said Whincup of the fuel scenario.

“You do get an advantage not taking on fuel because there’s a little bit more room at the back of the car when you’re changing tyres.

“But it might mean that you have to run a bit leaner or conserve fuel at some stage. I’ll be interested to see who rolls out what.”

The pitstop window opens on lap five and, while teams are likely to pit one car early in order to protect themselves from a Safety Car double-stack, stops are expected to be spread throughout the race.

Passing is traditionally difficult at the tight venue, ensuring that many will time their stops in order to maximise clear air.

Whincup says he’s a fan of the addition of pitstops to the Saturday action, but says that V8 Supercars should have stuck with two shorter races.

“For me the more races the better, I thought two races on Saturday was a good thing,” he said.

“Two shorter races with a pitstop would be ideal, because generally all the action happens at the start and finish and in the pitstop period.”

Among those in favour of the new format is Ford rival and reigning champion Mark Winterbottom, who set the pace in practice on Friday.

“It’s good that we get 15 mins qualifying and two sets of tyres,” he said.

“Qualifying is the best part of the weekend and this format allows you to go hard at it and really push.

“I’m looking forward to that as well as the racing side of it. It’ll provide the opportunity to mix it up a bit.

“If there’s a Safety Car a guy on brand new tyres versus a guy who stopped early… there’s various scenarios that can play out.

“I love what V8 Supercars have done.”

While thin allocations saw tyres re-used from Saturday to Sunday last year, changes for 2016 ensures that new soft rubber is available for each stint across the two races.

Winterbottom is confident that the extra rubber will also play a part in improving the show.

“No category in the world makes you re-use tyres,” said Winterbottom.

“Obviously there’s budgets and a lot of factors that go into it, but now we don’t have to re-use them.

“It was a hard way to go racing and it forced you to stop on the first lap of the window, because then your tyres were newer for the next day and you’d get a double gain.

“Now with the amount of tyres, it allows the strategies to open up. It’d definitely going to play a part.”