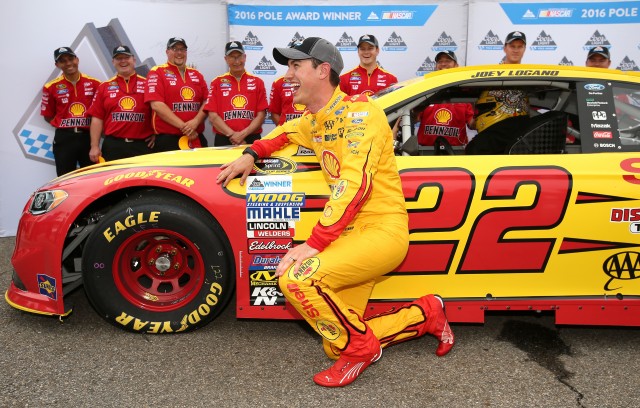 Lagano celebrates a hat-trick of poles at martisville

Joey Logano has made a statement on his return to Martinsville Speedway with pole position for the STP 500.

It may have been his 15th career pole and third-straight at the “Paperclip”; to tie a record with Jeff Gordon. However, most of the talk was about but it being the first time back at the shortest track in NASCAR since being dumped off the circuit and out of championship contention by Matt Kenseth in October.

“You’ve got to use things like that to motivate you – not only you and your team,” said Logano.

“I know I felt really excited and really pumped up and jacked up to come to this race track and show what we’re made out of. This is a good start.

“Qualifying here is more important than any other race track we go to. Having a good pit stall pays a lot here because you’re coming down pit road so many times, so I think it pays really big here.

“Also starting up front allows you to save your car and we’ve got 500 laps to go.”

The Penske driver set a lap speed was 156.176 km/h (97.043 mph) and will share the front row with Kasey Kahne, with Tony Stewart’s substitute driver Brian Vickers and Paul Menard lining up on the second row.