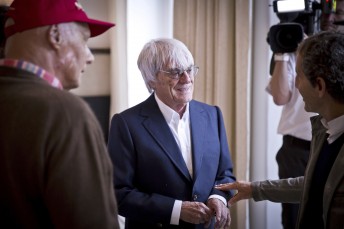 Bernie Ecclestone has suggested the use of ballots to determine the Formula 1 grid as a possible replacement for the controversial elimination qualifying concept.

Following its embarrassing debut at Albert Park, the new qualifying format remains in place for this weekend’s Bahrain Grand Prix despite moves from teams to scrap it.

Unable to reach a unanimous agreement to amend the format last week, a meeting between teams and the FIA to discuss qualifying changes is expected on Sunday.

However, Ecclestone, who is not a fan of the elimination procedure, has revealed his own ideas to improve the qualifying show.

The F1 supremo believes a ballot or the introduction of time being added to the front runners in qualifying will shake up the grid and produce better racing.

“A couple of ideas – either a ballot, which they (the teams) don’t like, which is not very sophisticated,” said Ecclestone when asked how he would improve qualifying.

“Or I suggest leave qualifying exactly as it is and don’t touch it and then add a time on.

“So if somebody is on pole, you can take the results of the previous race or the championship, and add two or three seconds or whatever the amount is, to the time of the qualifying.

“You will find maybe the guy who is on pole would be 10th on the grid or eighth, and that will go all the way down.”

While qualifying remains hot topic, the sport’s boss is due to hold fresh talks with promoters for a possible F1 race to be held in Las Vegas.

News of the race emerged this weekend when Ecclestone claimed that a contract is in place for the city to join the F1 calendar.

“It is possible that there could be an event there. They are going to have Formula E anyway,” he said.

“It would be a couple of years I suppose,” Ecclestone added after being asked when the event could join the calendar.

Las Vegas hosted F1 in 1981 and 1982 on a temporary street circuit situated in the parking lot of Caesers Palace casino.