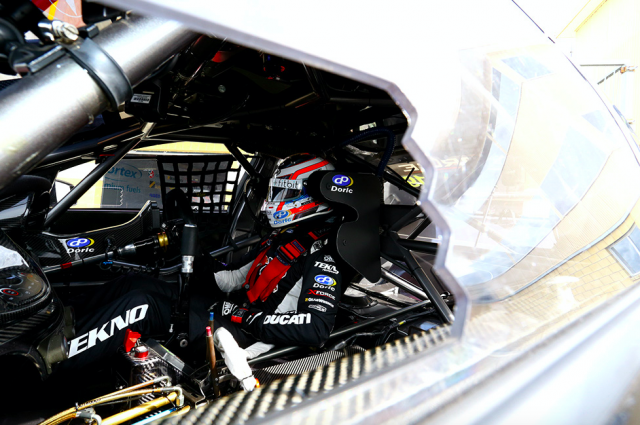 Will Davison expects that Tekno Autosports will only get stronger as the season progresses following a podium finish in Race 4 of the championship at Symmons Plains.

After a mixed run through the opening two events of the year at Adelaide and Albert Park, Davison proved more than capable of mixing it with Triple Eight’s three works cars at the Tasmanian venue.

The Tekno entry appeared the fastest of the four Holdens in the closing stages, overtaking Craig Lowndes for third before closing on Jamie Whincup at the flag.

Today’s result comes just over a week after high profile team manager Steve Hallam stunned the squad by announcing that he has elected to return to the United States, effective immediately.

Davison paid tribute to his crew for stepping up in a difficult week.

“Our aim for the day was to consolidate a good two days work and just see if I could run the pace of the leaders really.

“I’m still learning about this car and every lap of the race the more and more the reality kicked in that we were genuinely on the money.

“It was a lot of fun. This sport is pretty serious but races like that are what I have missed in the last couple of years.

“It feels good to do it with the team. There’s always pressure on to get results.

“Steve is not here this weekend and the guys have done a great job to keep their heads up high.

“Hopefully it’s the first of many. I hope we’re not celebrating thirds for too long.”

Davison’s last podium had come courtesy of a strategy-assisted victory with Erebus Motorsport at Barbagallo in May last year.

Bouyed by his latest result, Davison says that “anything is possible” with Tekno this year.

“We’ve got a great car and a great team, it’s all there, it’s just up to us to put it all together,” he said.

“I’m not a rookie, I’ve certainly been up here challenging for many years in the past.

“It feels good. We’ve got to do it consistently, but I’m confident I can.

“There’s only a couple of years in my career where I wasn’t a genuine contender every weekend.

“You like to always keep confidence in yourself, but you probably do get beaten around the ears a little bit.

“We’re going to get stronger and stronger as we get more confidence as a group.”