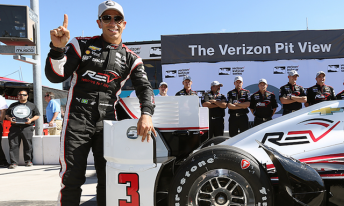 Helio Castroneves has secured pole position on IndyCar’s return to the Phoenix oval.

Castroneves unleashed a record two-lap average of 192.32mph (309.50km/h) to topple the previous record which stood for 20 years.

The three-times Indy 500 winner Castroneves said: “It’s an honor to be breaking the record, which has been holding for 20 years, and now we’re able to show that Verizon IndyCar Series cars are fast,” Castroneves said.

“My first lap was pretty good and the second lap was a little bit of a moments in Turns 3 and 4, which I was not expecting that.

“That’s probably why it was huge. But at the end of the day, we were able to put the #3 in the pole position and now have got to focus for tomorrow.”

Charlie Kimball will start from fourth ahead of Ed Carpenter with Chevrolet blasting Honda to claim the first 10 positions on the grid.

Reigning series champion Scott Dixon was sixth ahead of Josef Newgarden and Max Chilton with Team Penske’s Will Power and Simon Pagenaud completing the top 10.

The fastest Honda runner was Marco Andretti in 11th.

Carlos Munoz crashed on his first flying qualifying lap and will start from 20th.

Sato will start 20th with Hinchcliffe occupying 22nd with the final three positions based on entrant points.

Previous Story KVSH to power on despite transporter fire