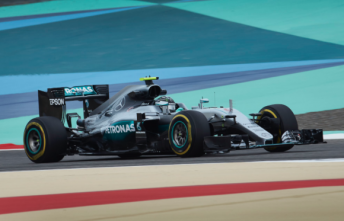 Nico Rosberg signalled his intentions for the weekend with a dominant performance in practice for the Bahrain Grand Prix.

The Mercedes driver topped both 90 minute sessions at the Sakhir circuit posting a personal best 1:31.001s effort in Friday’s second hit out under floodlights.

Rosberg, who was half a second faster than team-mate Lewis Hamilton in opening practice, continued his impressive form ending the day 0.2s ahead of the reigning world champion.

The German’s time arrived on the super-soft tyres having led the earlier runs on the soft compound.

The Brit was however 1.2s adrift of the Mercedes duo while Toro Rosso’s Max Verstappen was a tenth further back in fourth.

Kimi Raikkonen emerged in fifth after dedicating much of the session to long runs as he worked on his race pace.

Vettel had clocked a time good enough for third on soft tyres but was unable to improve following two errors during his super-soft runs, leaving him in sixth.

Red Bull’s Daniil Kvyat was seventh quickest ahead of the Williams of Valtteri Bottas and team-mate Daniel Ricicardo, while Felipe Massa rounded out the top 10.

Stoffel Vandoorne finished practice 2 just outside the top 10 in 11th as the Belgian impressed while standing in for the injured Fernando Alonso at McLaren.

Esteban Gutierrez was the top Haas F1 runner in 12th ahead of Carlos Sainz and team-mate Romain Grosjean.

Renault struggled for pace with Kevin Magnussen the top performer in 16th as he sandwiched the Force Indias of Nico Hulkenberg and Sergio Perez.