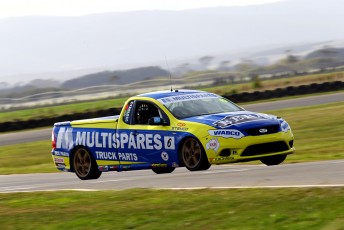 Ryan Hansford on his way to pole position

A late effort from Ryan Hansford saw him claim pole position for the second round of the V8 Utes Racing Series at Symmons Plains.

The Ford driver had occupied second for much of the final segment of qualifying before posting a 1:02.23s lap in the dying moments to snatch pole from Kris Walton.

It proved to be a hotly contested session with Nathan Pretty claiming third just a tenth further back from Walton, while David Sieders completed the second row.

Matthew Spratt and Danny Buzadzic rounded out the top 10.

Reigning champion Ryal Harris is absent from the meeting having decided to pull out of the next three rounds due to a lack of funding.

The V8 Utes will tackle a two 14 lap races on Saturday. 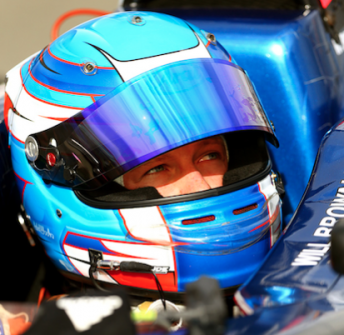 Will Brown emerged as the man to beat after topping the times in both practice sessions for this weekend’s opening round of the CAMS Australian Formula 4 Championship.

The Team BRM driver, who finished third in the series last year, clocked a personal best 56.99s in the morning’s 20 minute hit out.

New recruit Brenton Grove impressed on his maiden competitive outing in the series as he finished second in both sessions.

The son of Porsche Carrera Cup driver Stephen Grove was less than a tenth shy of Brown.

Nick Rowe and Jordan Love, who are both returning to category this year, were third and fourth respectively.

Action will continue on Saturday with a 20 minute practice session followed by qualifying and a 14 lap race.

Jason Bell set the pace in practice for the HQ Holdens after pipping rival Andrew Toth to the day’s benchmark time in the second session.

Bell clocked a 1:13.70s which proved to be 0.0446s quicker than his nearest rival, while Paul Beechey was third.

A little over a second covered the top 10 runners in an 18 car field.

Qualifying is scheduled to begin on Saturday morning ahead of a 14 lap race set to start at 1400 local time.