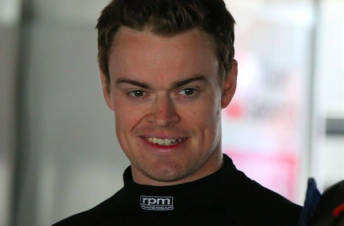 James Moffat edged Jamie Whincup to the top spot in a frantic end to opening practice at the Tyrepower Tasmania Super Sprint.

The Volvo driver jumped from 23rd to first with his penultimate lap of the session, recording a 51.89s to eclipse Whincup’s previous benchmark by 0.05s.

The peformance was highly encouarging for Moffat, who struggled to come to grips with his Volvo at Adelaide and Albert Park.

“It’s only Friday so I won’t get carried away, but it’s much better to be up that end of the time sheet,” he smiled.

“It was a good solid session and we got through quite a few changes.

“The encouraging thing was that every time we changed something it made it better.

“It felt like the track came on as well, which I’ve never really experienced here before.”

The session took place in cool and windy conditions, with showers predicted for later in the day.

Mark Winterbottom bumped Whincup from the top at the halfway mark, only to in turn be eclipsed by Lowndes just minutes later.

The Prodrive Falcon returned to P1 with nine minutes to go, kicking off a rapid-fire finish that saw Lee Holdsworth, Whincup and eventually Moffat shoot to the top.

Whincup spent the final minutes in the garage and is confident of finding further speed ahead of the day’s second session.

“We’ll work our way through, see where the other guys (team-mates) have gained, they’ll see where I’ve gained and move forward,” he said.

The six-time champion also noted that recent track works, which has included a refurbishment of all gravel traps, had an impact on grip levels.

“The side affect of the recent works is some loose dirt which has blown across the track, but I’m certainly not going to complain about that,” he said.

“They’ve improved the safety dramatically, which is the main thing.”

Garth Tander was one place further back in 12th after being baulked by Fabian Coulthard while on a hot lap in the dying stages.

Although only soft tyres will be used in the races this weekend, many spent time on the hards in Practice 1 as they make the best of thin tyre banks.

Both DJR Team Penske Fords ran almost the entire session on hards, leaving Coulthard and Scott Pye down the order.

Practice 1 ran green for its duration, with an early off track excursion for a crossed-up Lowndes at Turn 1 proving the wildest moment.

The day’s second V8 Supercars practice session will get underway from 1345 local time.