Engineer switch no worry for Waters

Engineer switch no worry for Waters 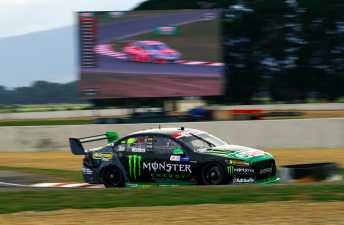 Cameron Waters on his way to P2

The absence of race engineer Brendan Hogan due to injury has failed to stop Cameron Waters from continuing a promising start to his rookie V8 Supercars Championship season.

The reigning Dunlop Series winner is the leading Ford driver in the points standings after Adelaide, sitting seventh after a mature drive to fourth place in the chaotic Sunday race.

Waters’ Adelaide result came alongside Hogan, who was headhunted by Prodrive ahead of the season to link with the youngster, whom he had previously worked with at Kelly Racing.

Hogan has however missed Albert Park and Symmons Plains after suffering a leg injury in a dirt bike accident.

Waters is instead working with Nathaniel Osborne, who stepped away from race engineering duties at the end of 2014 in order to concentrate on overseeing the squad’s engineering department.

“It’s been a little bit of a curveball,” Waters told Speedcafe.com of the change.

“Missing a couple of events hurts a little bit, but Brendan will go through all of the debrief sheets and everything to work out what happened.

“He’s still been at the shop, but he chipped a bone in the (knee) joint and has to have the leg elevated, which makes it hard to travel.

“It’ll be great to have him back for Phillip Island, but for the time being it’s good to work with ‘Ozzie’, who I know really well through the team already.”

Waters’ form today came at a circuit that he’d not been to since 2011, when he wrapped up the Australian Formula Ford Championship title.

The youngster proved unfazed by the short but challenging layout, which is typified by two big braking areas.

“These cars are all about the brakes and to be pretty competitive straight away here I’m rapt with,” he said.

“I’m pretty comfortable in the car and how it handles. It’s all kind of coming together.

“I think having a few events last year in the Car of the Future is helping me now. I know what I need and what I want from the car.

“The car rolled out pretty good today and I was able to learn the track pretty quick.

“By the end of Practice 1 I had my head around it and before Practice 2 we made some changes that made the car a bit better again.

“But it’s only practice and I think we’re going to need to find a little bit more time to stay there for tomorrow.”

The typically quietly spoken Waters says he’s keeping his expectations in check, but believes a win isn’t out of the question during his rookie season.

“My goal for the start of the year was to run inside the Top 10 and keep a straight car and so far I’ve done that,” he said.

“I think if I can be inside the top 10 I’ll be happy and if I qualify higher than that then the goal is to hold that position.

“Once you get a sniff of a good result it changes your expectations, but I’m not changing mine just yet.

“If everything comes together I think I can win a race this year, or at least finish on the podium.

“There will be tracks where I’ll be strong and others where I’ll struggle a little bit, but somewhere hopefully it clicks and we’ll be at the front.”