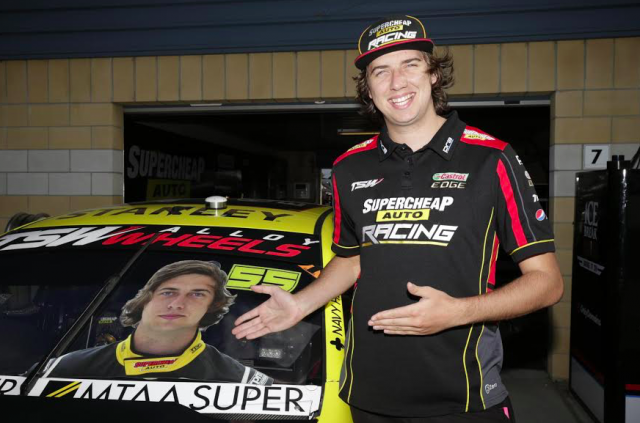 UPDATE: Speedcafe.com hopes you enjoyed our below story for April Fools day for 2016.

An attention grabbing new fan initiative is set to be debuted during this weekend’s Symmons Plains V8 Supercars event.

Aimed to increase engagement between drivers and fans, the locally developed stickers are totally transparent from inside the car, ensuring they do not hinder the driver’s view. 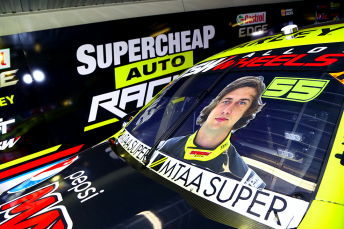 The decals do not obstruct driver vision

Winterbottom has raced with similarly large windscreen number decals in the Brazilian Stock Car Series and says the V8 Supercars version is exciting for fans.

“As a team and a sport we are always looking at new ways of engaging with our fans and I think this is another step in the right direction,” said reigning champion Winterbottom.

“At the start of the season V8 Supercars relaxed the rules around how we can customise our cars (number fonts).

“However, I’ve raced in South America for the last few years and all their touring cars run really large numbers on the windows.

“It is a great way for fans to identify each car so what we are trying in Friday morning practice in Tasmania is a natural extension of that.

“Unfortunately it means everyone in the stands and on TV will have to stare at my face when I’m on track!”

Team-mate Chaz Mostert has endorsed the idea having spent the last third of the 2015 season as a spectator after his Bathurst crash.

“After last year and all its ups and downs I’ve realised having a roof over my head and a helmet on is a great thing for safety, but unfortunately the casual fan might not know what I or my fellow drivers actually look like,” the 2014 Bathurst 1000-winner said. 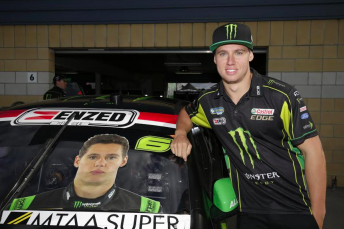 Cameron Waters poses with his windscreen

“Having watched a lot of racing on TV last season I know we can always improve the spectacle for fans at the track and at home.

“I think having our faces on the outside of the car is a great way to do that.

“We tested a few variations prior to the weekend to check driver vision, including a full windscreen design, so there’s been a decent amount of research go into the project.

“The material we are trialling in first practice is a special two-way vinyl which means we can see out perfectly so our vision isn’t impaired. There is no safety issue and the fans get a better experience.”

Former Bathurst winner, Paul Morris, said that the new product had been tested successfully in wet weather conditions and that a full-screen ‘tear-off’ system had also been developed, making the final product no different to a regular screen.

“It has been difficult to keep it under wraps for so long, but I think the final result is a credit to everyone involved,” said Morris.

“Some of the traditionalists may have some issues, but there are just too many upsides not to progress with it.”

“We have had the product in the pipeline for sometime and it is great to finally have it to a point where we can publicly test it and get the fans’ response,” said Sign Event owner, Mark Weissel.

“It really is a game changer on so many levels and I think the uses for it on a global scale are endless.”

It is envisaged that the decal technology will be made available to all levels of the sport over the coming months.