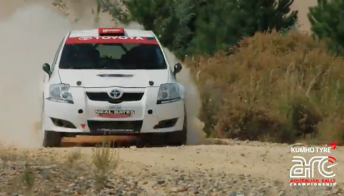 The Kumho Australian Rally Championship is gearing up for a five round series with the launch of a new media strategy.

For 2016 the Australian Rally Championship has agreed a new media strategy which will see it abandon its long term television rights agreement with Network 10 in favour of producing its own digital content.

The championship has agreed a deal with AirTime Media, headed up by former V8 driver and television presenter Neil Crompton, to produce its video packages.

“As most will be aware the 2016 Kumho Tyre ARC will see a significant change in its base promotion as we move away from a highly successful and mutually beneficial 18-year relationship with the Ten Network and with it a move away from television as our core promotional medium for the championship,” said ARC chairman David Waldon.

“There has been no time in history where there has been such a significant and rapid change in the media landscape and more importantly the way that all people consume media and information.

“Whilst television remains an integral part of the entertainment and information industry, other forms of information, especially digital content via the web and social media are quickly becoming a dominant force.

“Most importantly this content will capture the essence and excitement of the Championship. State of the Art, high-end television methods and more will be brought into play to catapult the exposure and relevance of the Kumho Tyre ARC within these new mediums.”