Home » News » IndyCar » KVSH to power on despite transporter fire

KVSH to power on despite transporter fire 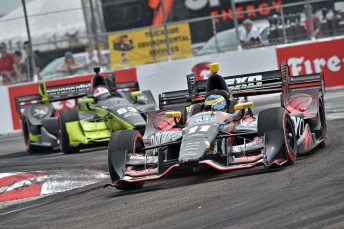 IndyCar squad KVSH plans to fight on at this weekend’s round at Phoenix International Raceway despite one of its transporters suffering a significant fire in the lead-up to the event.

A fire broke out around the rear axle of the lorry carrying the #11 Sebastien Bourdais entry while in the final stages of its trip from Indianapolis to Phoenix International Raceway.

The team has confirmed that both of its team members escaped without injury and the car and its contents have also emerged unscathed. 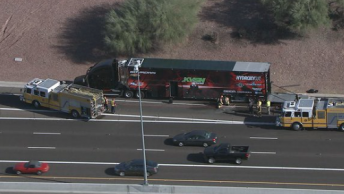 KVSH has confirmed that the transporter has sustained substantial damage.

“First and foremost, the good news is that both of our team members, John Phil Davis and Eric “Stu” Stewart, were uninjured,” said KVSH general manager Steven Moore.

“Secondarily, the cars and equipment are undamaged.

“We are very fortunate to have two highly skilled and experienced transportation professionals who took quick and decisive action. Without them this situation could have been a lot worse.

“KVSH Racing would also like to thank the members of other teams and local Fire and Police responders for their assistance.”

The KVSH team is due to prepare the Australian Pirtek Team Murray entry for Matthew Brabham, which will contest the Angie’s List Grand Prix (May 14) and the 100th running of the Indianapolis 500 on May 29.