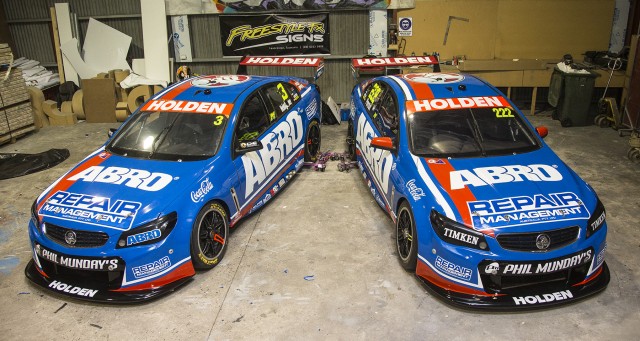 Already represented on the cars, ABRO has decided to increase its support and become title sponsor for this weekend only after Nick Percat delivered the team’s maiden win at the Clipsal 500.

Percat and Andre Heimgartner’s Commodores will display the new Peter Hughes designed blue and orange one-off livery for the first time at Symmons Plains this weekend.

“Having ABRO increase their support shows that they see commercial value in their involvement with LDM, which is wonderful to see,” said team boss Lucas Dumbrell.

“We wanted to continue with keeping the two cars in matching livery and I think the final design will look quite prominent on track.”

“Phil has been involved with both myself and the team for five years and his continued support and mentorship has been invaluable in helping to mould the team to what it is today,” said Dumbrell.

The cars will held out on track for the first time at Symmons Plains on Friday.