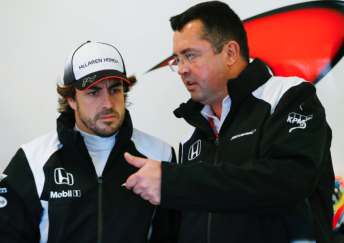 Fernando Alonso will sit out this weekend’s Bahrain Grand Prix after failing a medical examination.

The McLaren driver, who walked away from a horrific high speed accident during the Australian Grand Prix, has been deemed unfit to race.

Alonso underwent a medical examination at the Sakhir circuit but the double world champion failed to meet the necessary targets set by FIA doctors.

A further chest scan will be completed to assess his fitness before receiving the green light to compete at the Chinese Grand Prix (April 15-17).

McLaren has since confirmed that reserve driver Stoffel Vandoorne will fill in for the Spaniard this weekend.

“Following an examination undertaken this morning at the Bahrain International Circuit Medical Centre, it has been decided that McLaren Honda F1 Team driver Fernando Alonso should not take part in this weekend’s Bahrain Grand Prix,” read a statement from the FIA.

“A repeat chest scan has been requested before the Chinese Grand Prix and the results will be considered before allowing him to race there.”