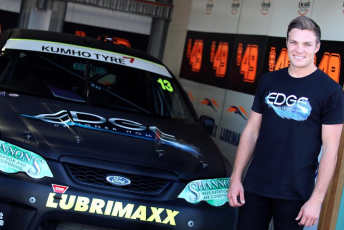 The Queenslander will team up with Terry Wyhoon’s squad to contest the full campaign in the third tier V8 series as he looks to build a career in tin tops.

Greenbury, who has racked up starts in V8 Utes and Aussie Racing Cars, will pilot an ex-Stone Brothers Racing BF Falcon, raced by James Courtney in V8 Supercars and Scott McLaughlin in the Dunlop Series.

The 23-year-old tested the BF Falcon at Phillip Island prior to this weekend’s first round at Sandown.

Although quick to admit this season is a learning year, the 23-year-old is already hinted at possible outings in the Dunlop Series this year.

“This year we want to do Kumho series and perhaps later this year do some stuff in DVS, but definitely that’s the aim for next year,” said Greenbury.

“I feel confident that we can go alright this year and learn a lot of stuff and get up to pace with things. Most of it is about learning for me.”

Greenbury will join 16 car entry for the opening round at this weekend’s Shannons Nationals opener.